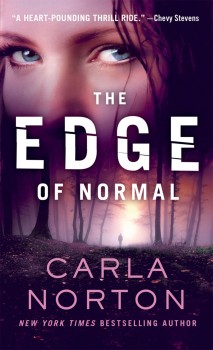 The Edge Of Normal

Recovering kidnap survivor Reeve LeClaire is asked to help a young girl rescued from a similar situation and unintentionally becomes involved in the hunt for a vicious sexual predator who may be holding other girls captive.

Occasionally a debut author will shift the whole way you look at a genre. Journalist and true-crime writer Norton is one of these. This year has seen several fiction works on abduction and the traumatic experiences of women held by abusers, all given credibility by the horrific Ariel Castro case – but this is, without doubt, the real thing.

Norton dedicates her searing book to ‘Colleen Stan’ – the pseudonym of the girl held for seven years as a slave by Cameron and Janice Hooker, who forced her to endure Cameron’s sexual perversions and held her captive in a coffin-like box under their bed. Norton covered their trial and her book Perfect Victim became a number one New York Times bestseller and is on the FBI’s Behavioural Sciences Unit reading list.

She has poured all that experience into a sophisticated and addictive story of a young kidnap victim fighting to rebuild her life, at first restrained by her own limits, then constantly testing those limits, an authoritative and authentic portrayal of a woman’s battle to conquer fear.

Reeve LeClaire has spent the last six years trying to rebuild her life with help from an intuitive and sympathetic therapist. She escaped her captor by luck – and when her therapist asks her to help another girl rescued from a similar situation, she comes to realise she may not just need to mentor the young victim, she might also be the only one who can protect her from a predator who may be holding two other girls and who appears to know every move in the hunt for them.

Reeve is an extremely likeable and sympathetic character and it is a tribute to Norton’s journalistic ability that you can hear the voice of ‘Colleen’ through her so clearly that even a hardened cynic like myself could hardly put this down. Her own doubts, the developing relationship between the girls and the way they react to the ongoing police investigation, the subtly understated trust with her therapist, the characterisation of the abductor – a sick but charming professional who dispassionately manipulates others – is all brilliantly compelling.

Subtlety is the strength of Norton’s story. Her experience of working with a survivor allows her to write naturally and authentically on what is a truly horrifying subject without the stretched and laboured plots of similar stories. Nothing is taken too far and Reeve’s growing involvement in the pursuit of the manipulative and brutal abductor becomes natural, yet at the same time the most compelling aspect of the narrative.

Even her tentative relationship with a handsome detective is played low key and there is no ‘roses round the door’ ending as Reeve continues her journey from victim to a more self-confident woman. The final showdown is handled with the same care.

The unfortunately topical subject may be disgusting, but Norton’s handling of it is balanced, clever, thought-provoking, totally believable and completely absorbing.