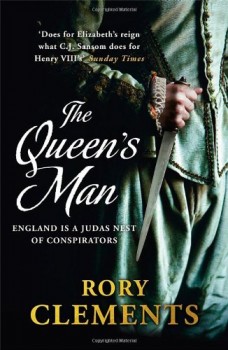 John Shakespeare is ordered to investigate a plot to free Mary, Queen of Scots, but discovers its roots go deep into his native Warwickshire and threaten his own family. How far will he go to protect them?

Spooks is back! Not the over-acted, over-gadgetted TV series, but a proper cloak and dagger mystery featuring Elizabethan counter-espionage agent John Shakespeare in his sixth adventure – or should it be his first? This prequel deals with his recruitment, his first investigation and introduces many of the characters who feature in the other books.

What makes Rory Clements’ series so believable – and enjoyable – is its setting. This was a period where even the wildest plot can be matched by historical fact as first the French Catholic League and then the Spanish empire and their fanatic co-religionists sought to destroy the heretics of England – and in particular its Queen – by any means.

The threat was so severe, Elizabeth, having decreed a man’s religion was his own affair, executed more than 250 Catholics by fire or hanging, drawing and quartering, and England’s fledgling security services under the brilliant and devious Sir Francis Walsingham were at full stretch.

The year is 1582. The French, led by the powerful Duke of Guise, are planning an invasion to replace Protestant Elizabeth with Catholic Mary, Queen of Scots, former Queen Consort of France. But Mary is imprisoned in Sheffield Castle after her escape from the Scottish prison where her own nobles had placed her. England is split. Less than 50 years after Henry VIII broke with Rome, the majority still follow the Catholic faith. Extremists of both persuasions will go to any lengths to achieve their ends – and Mary is a focus for plotting and dissent.

Shakespeare is sent to investigate another scheme to help the Stuart queen to escape to France, but soon discovers its roots go deep into his native Warwickshire and threaten even his own family, particularly his younger brother Will – yes, that William Shakespeare! The young agent is loyal to his Queen, but faced with a choice between country and family, how far will he go?

Many of the major players in Shakespeare’s world make their appearance here. The reliable Boltfoot Cooper, former sailor and Shakespeare’s gofer, right hand man and bodyguard; the brutal psychopath Richard Topcliffe who will oppose him throughout his service; Principal Secretary Walsingham himself; and Robert Dudley, Earl of Leicester, who will go to any lengths to achieve his royal ambition.

Throw in a cold-eyed killer, a slippery mercenary intelligence gatherer, a 16th century Ursula Andress, some hot sex and bloody violence and this rollocking tale races between London, Yorkshire and Stratford-on-Avon full of action and adventure all the way – all backed by solid history. William Shakespeare really was related to or knew almost every one of the Catholic plotters in Warwickshire and some scholars doubt his own religious affiliations.

There are rumours Shakespeare may soon be showing the modern Spooks how to do it with a TV series under development. If that’s so, it should start here – a great opening for a great series.