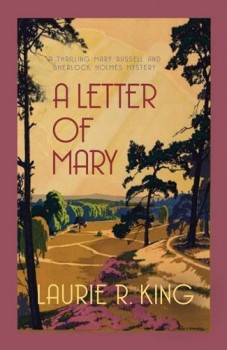 A Letter of Mary

Mary Russell Holmes and her husband Sherlock’s retirement is interrupted when a figure from Mary’s past arrives with a gift – an inlaid box containing a stained papyrus which could prove a biblical bombshell. When the visitor is run down a day later, the Holmes investigate her murder and its motives.

Laurie R King showed some nerve to take on the mantle of Arthur Conan Doyle and continue the Holmes series. But it took real balls – if she’ll pardon the term – to marry off crime fiction’s most famous bachelor to an aggressively independent Jewish-American religious scholar almost 40 years his junior!

Although it may not be the most convincing of marriages – as one would expect, Holmes is hardly the Great Romantic – it is a most convincing partnership, a true meeting of minds and utterly credible.

This is third of the books featuring her, now reissued in paperback after a ten-year gap. Russell is rapidly emerging from her mentor’s shade to becoming his equal as her quirky intellect and modern methods deserve – a real heroine to savour.

Mary is approached by an old acquaintance, a prototype feminist archaeologist, a wonderful character in the mould of several of the great British women travellers and explorers of the early 20th century, who brings her an ancient papyrus, supposedly a letter written by Mary Magdalene. The following night she then becomes the victim of a hit-and-run killing and Mary and Sherlock investigate.

There cannot be many fans of Holmes who would be disappointed with King’s meticulous research and her treatment of the character. While retaining much of his aesthetic detachment, his extraordinary leaps of detection and his none too certain temper, particularly when dealing with fools, she manages to introduce an occasional and believable element of genuine humanity – even an admission that there may be things in life which cannot be solved by pure logic!

This atmospheric piece is set in the early 1920s and reflects that febrile time well – and also takes an interesting look at the rapid changes in investigating techniques, many of which were pioneered or adapted by Conan Doyle’s hero. King has effortlessly reinvented and made the character – and that of Russell – her own, without ever slipping into slavish imitation. A Letter of Mary is a clever work, which although part of a series, stands equally well on its own.

The ending is perhaps something of an anti-climax, illustrating that even the greatest detectives do not always land the biggest cases. And in one or two cases King’s use of English dialogue is a little wayward. Mary, of course, can be excused, but for Mycroft, a new, younger and more appealing Lestrade and the fastidious Holmes himself, it is occasionally jarring.

That said, A Letter of May is a super book that the master detective’s inventor would have been proud to put his name to, and is an appealing and fascinating read.