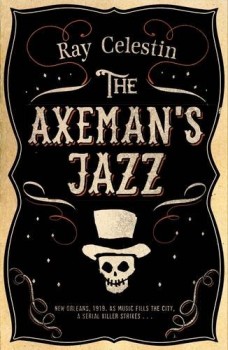 1919 and a mad axeman is terrifying New Orleans, America’s most racially mixed and vibrant city. Three very different individuals – a police Lieutenant with his own secrets, a disgraced ex-detective and the mixed-race secretary of a detective agency – set out to track him down.

Ray Celestin’s exciting debut novel has covered all the bases – a clever and utterly believable procedural with a suitably grisly killer, set in a brilliant and vibrant historical background in one of the world’s most multi-racial and fascinating societies. Inspired by a true story, he pulls no punches. His New Orleans, a year after the end of the First World War, is a truly nasty place, riddled with massive and endemic corruption, racism and organised crime all echoing the throbbing chords of the ‘new’ black music of blues and jazz.

A brutal axe killer is terrorising the city, his victims apparently random and his trademark a tarot card left in their mutilated heads. Each community, Black, Creole, Italian, Jewish, Spanish, Swedish, German, blames the other. The corrupt and inefficient police and city council face a complete breakdown.

The killer provokes further panic among a superstitious population, when in a letter to an Orleanais newspaper he claims demonic form and sets a deadline for his next killing – unless everyone is listening to a jazz band at the appointed time!

Three very different individuals set out to track him down. Detective Lieutenant Michael Talbot is unpopular in his own force for his exposure of his corrupt former mentor – and has a secret of his own to protect. Luca d’Andrea, the man he helped jail, is out of prison and working for a Mafia don – who must solve the axeman mystery for reasons of his own. And Ida Davis, the mixed-race secretary of a drunken Pinkerton detective, obsessed with Sherlock Holmes and dreaming of a better life, stumbles on a clue which launches her own quest.

All three pursue separate courses but eventually reach the same conclusion – and each must put their life at risk from criminals whose own exposure is threatened by their investigations. Ida has the help of her lifelong friend, the young trumpeter Lewis – he didn’t adopt the French version of his name until later – Armstrong. The former children’s correctional home boy is beginning to realise his enormous potential with great bands like Kid Ory and Fate Marable, but it is his connections with the seamier side of the black community which aids her.

Armstrong’s own rise – and his decision to quit New Orleans – form a compelling sub-text to a story which brings the city to throbbing life. Celestin’s characters are totally realistic, from the back street whores of Storyville to the opium-addicted reporter who knows far more than he should. But it is his ungarnished and, often deeply unflattering, descriptions of the people and the town itself which make this book such a memorable and genuinely compelling read.

He maintains a mixture of hectic pace, horrifying brutality, social comment, first class historical detail and moments of surprising and genuine humanity right through to a totally genuine denouement set in a typical Louisiana gulf storm. And the mention of a certain Alphonse Capone in the epilogue promises more to come.