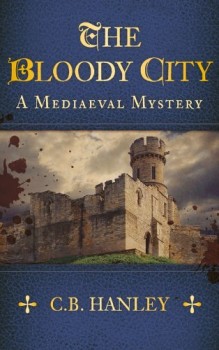 Edwin Weaver, son of the former bailiff of Conisbrough Castle, has already bailed his devious lord out of trouble once. When William de Warenne, earl of Surrey, decides to change sides – again – in the civil war ripping England apart, he volunteers Edwin for a dangerous mission.

CB Hanley has chosen a period about which most English know little as the setting for her mystery series featuring young Edwin Weaver, son of the former bailiff of Conisbrough Castle in Yorkshire.

Edwin is educated, mathematically gifted and logical – and also the product of his monkish upbringing, principled and naïve, with little understanding of the politics and treachery of the noble classes of which his lord, William de Warenne, earl of Surrey, is a prime example. In 1217 England is in the grip of civil war. Many lords, sickened by the misrule of King John, have invited Prince Louis, the Dauphin of France, to take the throne and he has brought an army to suppress opposition. But with John’s death and the succession of Henry III, most have re-joined the Royalist cause, led by the regent, that paragon of chivalry William Marshal, and Ranulf, Earl of Chester.

The vacillating and devious de Warenne, a royalist commander, allowed the rebels into his castle at Reigate unopposed and later offered Louis support. Within months, he changed his mind and when Marshal summoned the loyal lords to battle in May 1217, went back to the royalists – although he was not trusted and he and his troops took no part in the bloody events described.

The climax of the war came at Lincoln where the French and English rebels seized the city but could not take the castle commanded by the redoubtable Dame Nicola de la Haye. A long siege left the defenders desperate and Marshal’s smaller army unable to reach them. All attempts at contact between besieged and relievers were detected – and bloodily punished with one man’s severed head catapulted into the castle.

De Warenne, anxious to ingratiate himself, volunteers his bright young temporary bailiff for a dangerous mission – and Edwin must not only work out how to achieve his goal, but also uncover the resistance movement, find out who is betraying them, and protect the beautiful girl he meets and her younger brothers and sisters. He also faces a crisis of conscience – whether he is prepared to use the sketchy training he has received at the hands of two friendly knights and is actually prepared to fight and kill.

Hanley’s skill is to weave a credible story into this rich background of fact – and again she succeeds brilliantly. Edwin’s qualms of conscience are perhaps a shade 21st century PC, but still quite believable given his background. The rest, as they say, is history, but history brought to brutal and bloody life from the stench of death in Lincoln’s streets to the wrangling, ambition and confusion of England’s would-be noble saviours.

The characters are real, the interactions and conversations natural, the tension inbuilt, and it all builds to a genuinely satisfying conclusion both fictionally and historically. I was fascinated by Edwin’s debut in Sins Of The Fathers. This development of his character is just as good and I look forward to the future of his relationship with the gutsy Alys in a third story.