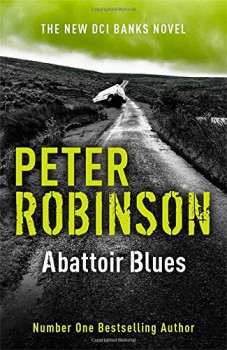 DCI Alan Banks’ holiday mood is soon dissipated by three seemingly random crimes – the theft of a tractor, the disappearance of two young men, and an arson attack on a caravan.

It’s probably most appropriate that the title of this book is also a track by everyone’s favourite Aussie misery-guts, Nick Cave. For this is a dark book, seemingly taking place in dimly-lit rooms, murky pubs, muddy farms and freezing cold hillsides.

DCI Alan Banks is back from a break in Umbria – not Cumbria, as his colleagues insist on saying! And there’s a liberal helping of the lurve stuff in Abattoir Blues – Banks is going out with a woman half his age, Annie is single and miserable, while the very capable and independent Winsome has a suitor.

Not that they have much time to reflect on affairs of the heart. The book kicks off with the theft of a tractor from a gentleman farmer – one of those blokes that the taciturn locals reckon is just dabbling. Then two lads disappear and a caravan is set on fire. It all seems rather random, until Banks and his team dig deeper, aided and abetted by ‘Dirty Dick’ Burgess, Banks’s semi-tamed spook who always has his finger in lots of pies.

Peter Robinson’s last outing, Children of the Revolution, wasn’t one of his best, but he’s bang back on form with Abattoir Blues. It’s what he does best – building up an atmosphere, intricate plotting and giving his cast room to manoeuvre. I always suspected one of the reasons his books took so long to be dramatised was because of the lack of a strong sidekick. The TV version has done nothing to change my mind (particularly as I can’t see big and edgy Stephen Tompkinson as shorter and calmer Banks), but in the books Annie and Winsome are strongly-drawn and keep this reader’s attention.

Keeping a long-running series fresh is always a huge challenge for an author, but Robinson has always attempted to keep his characters moving personally as well as professionally. He also uses his stunning Yorkshire landscape and communities to best effect. The final scenes of the book kept me up until the early hours of the morning with all the lights on.

Abattoir Blues is a seriously chilling tale. All I have to say is, I’m glad I’m vegetarian!