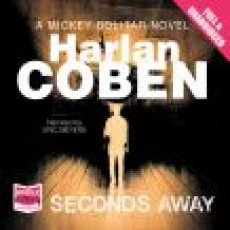 Mickey Bolitar and his friends find themselves in deep water again when one of their group is shot.

Harlan Coben’s answer to the Scooby Gang is back. Seconds Away picks up directly where Shelter, the previous young adult book in this series, left off. Mickey Bolitar is trying to come to grips with the puzzle of how the hell the paramedic who attended the scene of his dad’s fatal accident could be the same person as a Nazi war criminal in an old photo shown to him by the mysterious Bat Lady, as the local kids call her. For anyone coming new to the series, this is all dealt with in a helpful, but not overly long or boring, recap at the beginning.

Mickey is staying with his uncle, sports agent Myron Bolitar, while his mother is in rehab. He’s not happy about that and he doesn’t like his uncle very much, but fans of Coben’s adult novels will no doubt enjoy meeting a familiar face. Mickey’s friends and enemies are back as well, with prickly Goth-dressing Ema, loyal and slightly dorky Spoon, as well as the slightly more stereotypical school jocks, Troy and Buck.

When Mickey’s friend Rachel Caldwell is shot and her mother killed, the teenagers are shocked, but in the best tradition of pesky kids, are also determined to find out who murdered Rachel’s mother and put their pal in hospital with a gunshot wound to the head. The scene where Mickey, Ema and Spoon try to get past hospital security to talk to Rachel is a great mix of light-hearted fun, an element of slapstick, and a level of threat and intrigue that keeps it from descending into farce.

Coben does a good of fleshing out his teenage protagonists this time around, with them all gaining added depths. It was good to learn more about Ema in a side-story that managed some neat twists that I certainly didn’t see coming, and when their adventures take a darker turn with one of the group getting seriously injured, I was left wondering quite how dark the book was about to get.

Seconds Away does a good job of keeping you guessing, as well as setting up a convenient plot device to explain why a group of kids keep getting involved in this sort of thing. The central characters work well together and are strong enough to hang a series on. Plenty of seeds have been sown for future escapades, within a wide plot arc, and I’ll certainly check back in to see how things progress. Mickey isn’t the only person who wants to know what’s happened to his father!

Eric Meyers’ narration has definitely hit his stride in Seconds Away, as well. The female voices are less breathy and intrusive than they were at first, and he’s generally becoming more convincing.

I listened to this on a long drive from the UK to France, and both my husband and I were hoping we’d get to the end before reaching the house. It was touch and go, but we reached then end no more than five minutes away from home, which was fortunate, as otherwise we would have ended up sitting in the car until the end. This wasn’t a story we could easily have walked away from in the closing stages.