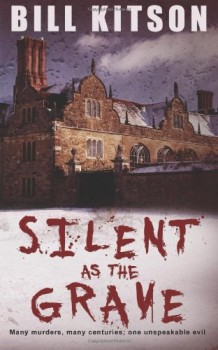 Silent as the Grave

Former TV correspondent Adam Bailey is asked to investigate the mystery of a curse on the aristocratic Rowe family over a Christmas at their isolated Yorkshire home. Cut off by a snow storm, Bailey must try to resolve rumours of madness in the family – and deal with new violence and more killings.

What a great, old-fashioned country house murder mystery! Bill Kitson has got it all down to a ‘T’. It’s not quite Colonel Blood in the pantry with a hammer, but pretty much the same idea, wrapped up in a clever plot, brought up to date and given a couple of psychological twists.

Former investigative reporter and TV correspondent Adam Bailey agrees to spend Christmas at Mulgrave Castle, an isolated stately home on the Yorkshire moors, knowing that his former university flame, Lady Harriet Rowe, has an ulterior motive behind the invitation.

Now happily married, she and her husband, Sir Anthony, want him to investigate the legend of a family curse said to have claimed several victims among his ancestors – the most spectacular disappearances always occurring between Christmas and New Year and 100 years apart.
If there is any grain of truth in the local folk tales of inherited insanity, the curse could be set to strike again – and the couple are worried both for the current baronet and their bright 12-year-old son.

Being a traditional whodunnit, snow cuts the castle off almost as soon as the Christmas house guests assemble – all except Bailey and Sir Anthony’s business partner are family. When they sit down for breakfast on Christmas morning, none is aware the curse has already struck. With the weather blocking the arrival of the police, Adam, aided by Harriet’s sister, Eve Samuels, tries to discover if the latest death can somehow be linked to disappearances that have occurred since Tudor times.

Another killing and attempts on the lives of the Rowe’s son and Adam himself disrupt their enquiries, but those responsible for present-day crimes cannot match the power of a far older evil.

There are great characters right down to the crusty, port-swilling butler, plus interesting and well-developed byplay between widower Bailey and violence victim Eva. Altogether, Silent as the Grave is a beautifully-written and well-rounded mystery thriller that will keep you guessing right up to a surprising denouement.