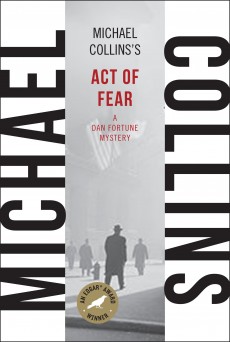 A girl is murdered, a policeman on the beat is robbed of everything he carries, and a man goes missing. Dan Fortune is hired to find the man and tries to put the pieces of the puzzle together.

In the high-rise tenements of the New York neighbourhood of Chelsea, a largely immigrant population struggles to make a living and stay clear of criminals, in particular Andy Pappas, a gangster boss. Chelsea-born Confidential Investigator Dan Fortune is hired by Pete Vitanza, whose pal Jo-Jo Olsen has gone missing.

Dan is aware that the garage where Pete and Jo-Jo work is very close to the scene of two recent crimes: the shooting of Pappas’s girlfriend, and an assault on a beat cop who was robbed of everything down to his shoes. The disappearance is seemingly linked to these matters, but how is unclear. Dan’s investigations stir up some violent opposition, from the Olsen family, from Pappas and his enforcer Jake. Several murders and beatings follow, which show that someone is very serious about getting to Jo-Jo before anyone else.

Dan is not your usual private eye. For one thing, he only has one arm, after an accident in his youth which brought about an abrupt change in his life path. Unlike most of his peers, Dan has travelled and read widely, and is conscious that he cannot display his learning if he is to establish a rapport with informants.

His girlfriend Marty dances in a burlesque club, but is keen to move into legitimate acting, and demonstrates she knows her playwrights. Dan himself is prone to philosophical musings: “You have to live a while for (cigarettes) to kill you, and I’m not sure many of us are going to make it. The men who control the bombs wear better clothes and speak better languages than Pappas….but they are the same men.”

Act of Fear was written in 1967 but has the feel of something older: apart from a few references like that above, the book could be set pre-World War II. The gritty nature of the working-class lives depicted, the lack of cash and basic amenities, and the limited horizons of the populace all characterise a bygone era. Dan does a good deal of schlepping on foot, and takes a beating without much complaint. Fans of Chandler and Hammett will find much to recognise, and to like.

The writing is of its time, with terse, bitten dialogue and more description than you would find in modern fiction. But the narrative comes direct from the mind of the protagonist, so the reader is always at one with Dan as he moves through a world convincingly created, with plenty of threatening confrontations, and the enigma of Jo-Jo’s disappearance always on his mind.

Michael Collins is the pen name of Dennis Lynds, who, after service in WWII, lived in California until his death in 2005. His 80-plus novels don’t seem to be generally available, but if the release of Act of Fear is successful, perhaps we will see more.