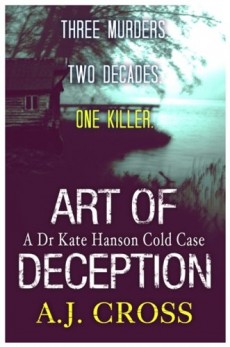 A mummified body is found in the remains of a deserted summerhouse in a country park. Kate Hanson and Birmingham’s Unsolved Crimes Unit have to delve into the past to make sense of the present.

Cold cases don’t come much colder than the discovery of a mummified body in a summerhouse near a lake in a country park. Two boys break in and get the shock of their lives, but they shouldn’t have been there and they have no intention of reporting their find, leaving a dog walker to come across the body the following day. The dead man turns out to be art student Nathan Troy, who disappeared 20 years ago.

AJ Cross’s leading character, Kate Hanson, is a psychologist who acts as a consultant to Birmingham’s Unsolved Crime Unit, thus neatly bridging the gap between amateur sleuth and the professionals, giving her a reasonable excuse to get involved in the hunt for Nathan’s killer. As plot devices go, this is streets ahead of numerous other ways that authors choose to inveigle their protagonists into the heart of a police investigation, although how far it mirrors reality is certainly questionable. Most police officers of my acquaintance hold psychologists in about the same regard as they do psychics when it comes to hunting for killers!

The investigation into Nathan’s disappearance and death almost immediately hits a brick wall when everyone who knew Nathan at university seems determined not to talk about him, claiming little or no memory of events so long ago, and denying any close friendship with him. Veiled remarks and hints abound, but hard information is sadly lacking, much to the frustration of Kate and her colleagues, and what they do learn about Nathan is greatly at variance to the picture painted by his parents, now grieving for their son’s death.

Kate’s colleagues on the Unsolved Crime Unit are a varied bunch, from bluff, down to earth DS Bernie Watts to calm, competent Lieutenant Joe Corrigan, a firearms trainer on secondment from Boston, Massachusetts. Corrigan was the cause of some confusion for me in the early part of the books, as I must have blinked and missed his introduction, so for a few chapters I was convinced that I’d misread the blurb and that the book was actually set in Birmingham, Alabama! Eventually, references to the M5 and Selly Oak helped to straighten me out, but the fact that my confusion lasted so long says something for a lack of a strong sense of place in the early parts of the book.

That aside, Art of Deception succeeded in getting me on its hook pretty quickly. The stonewalling by those who knew Nathan telegraphed that there was a story to tell, but by no means what it was, and that was only uncovered by some clever digging by the team. On top of that, Kate Hanson is a strong character in her own right, always a bonus with female characters. Her sparky relationship with her teenage daughter provides plenty of wry amusement that any parent is likely to empathise with, and her ex-husband is an equally entertaining pain in the rear. And whilst Kate is quite clearly interested in Corrigan, that attraction is never in danger of over-shadowing an enjoyable and well-presented police procedural which has the added dimension of a civilian investigator with a good reason to be involved. The only minus score comes from a few uses of the long-outdated term WPC, which has a nasty tendency to call research in general into question, and the sooner it’s eradicated from modern day crime fiction, the better.

I liked the characters, the story was convoluted without being impenetrable, and once I got to grips with the fact that this really was our Birmingham, the setting gradually asserted itself. On the strength of this showing, I’m very likely to go back to search out Gone in Seconds, the first in the series.