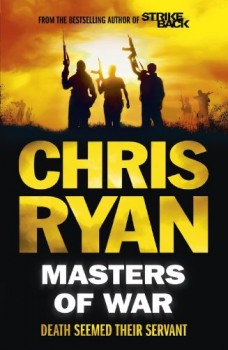 SAS trooper Danny Black leads a small team of fellow soldiers riding shotgun for an MI6 agent who is attempting to make contact with one of the rebel factions in war-torn Syria.

An elderly man is killed in Paris by a suicide bomber. The killer’s family is brutally murdered. This hard-hitting opener gives way to the introduction of Chris Ryan’s new lead character, SAS trooper Danny Black, coming to the end of a gruelling tour of duty in north Africa. No sooner is that job over than Danny is plucked out of one mission and goes almost directly into another, with hardly any respite in between.

He can do little more than look in on his former paratrooper father, damaged almost beyond repair by a gunman’s bullet in the hospital in Northern Ireland where Danny had just been born. Danny’s brother, Kyle, who witnessed the attack, is well and truly off the rails. Danny pays a brief and unsatisfactory visit to Kyle, who’s just out of prison, and then he’s pitched straight into his new job, riding shotgun for an MI6 agent who is being inserted into war-torn Syria in an attempt to make contact with one of the rebel factions, with a view to attempting to broker a reconciliation between two opposing rebel leaders.

Things very definitely don’t go according to plan, and it’s left to Danny to attempt to put back together some very broken pieces in one of the most dangerous war zones in the world.

Masters of War made difficult reading against a backdrop of the then debate in the House of Commons on whether the UK should involve itself directly in the Syrian conflict as a result of the accusations of the use of poison gas. Chris Ryan doesn’t spare anyone’s sensibilities in his depiction of the daily atrocities taking place in Syria. He explores the growing use by governments and their opposition of the euphemistically named private military contracts, otherwise known as mercenaries. It’s uncomfortable territory, and leaves behind the feeling that there’s little by way of exaggeration anywhere in Ryan’s writing.

Where he does fall down, though, is in some lazy characterisation. The MI6 agents he introduces are called Oliver Carrington and Hugo Buckingham, playing firmly to the idea that anyone in the secret service has to have been educated on the playing fields of Eton or Harrow. To make matters worse, Buckingham repeatedly refers to Danny as ‘old sport’, making it hard to take him seriously, whilst telegraphing very loudly that neither man is to be trusted. Unsurprisingly, Ryan is on far safer ground with the military characters on either side of the public/private divide. He manages to give even minor characters reasonable depth, and when death inevitably happens among their number, it clearly matters to the other characters, thereby making it matter to me as well.

Unlike many thriller writers, he does a good job with his major female character, Médecins Sans Frontiers doctor, Clara Macleod. Clara is well-drawn and very definitely not just there to play the role of passive victim. She’s strong and gutsy, despite being caught up in the casual violence all around her. She’s there to help, but that carries little weight amongst either the rebels or the government forces.

Ryan writes well on a difficult subject, and Masters of War left me with a profound sadness about a situation that certainly has no easy solution.