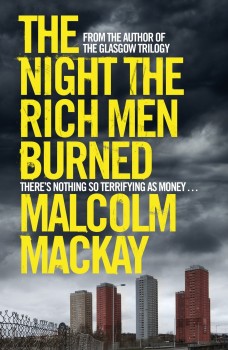 The Night the Rich Men Burned

Two young friends try to escape a pointless life on Glasgow fringes and become involved in the loan-sharking and collection rackets. One rises quickly up the ranks. The other becomes a victim of growing debt and addiction.

Malcolm Mackay’s fourth novel and first standalone does not stray from a tried and tested formula – a spare, authentic and brutal tale set in the back streets of Glasgow, a city in the grip of a depression.

This is not Tartan Noir. It’s pure Mackay noir – a convincing underworld portrayed with assurance in which he skilfully gives the impression that he somehow has an inside track on how desperate people think and act. This sad and sordid – and utterly predictable – little tale of friendship betrayed by ambition contains many elements of classical tragedy – continuity of setting, fatal coincidences and the clash of violent men in a permanent struggle for power.

But there’s little classic about the helplessness of life on the fringes of a recession-ravaged city and this most certainly isn’t a book that is going to make you feel better about life in general.

Two friends, without work or hope, are drawn into the dark and violent world of loan-sharking and debt collection.

Starting as hired muscle, one works his way up the ranks until he has his own successful operation and is ready to challenge the established hierarchy. The less strong-willed falls prey to an addictive lifestyle and ever-spiralling debts as he tries to maintain and even normalise his relationship with a teenage prostitute.

All this takes place against a squalid background of drugs, prostitution and the constant struggle for power among the bosses of the brutal collection gangs – and by proxy, their patrons among the higher criminal ranks.

It is a fast-paced read, a harrowing tour de force that plunges into the violent world of gangsters with enough focus and motivation to at least make them understandable. The almost entirely male characters – flawed, potentially massively violent wolves preying on the weaknesses of society’s victims – are well thought out and shockingly believable

Mackay wastes no words on descriptions, or detailed accounts. The words and actions of his characters are all that matters as he leaves no back street stone unturned. This is a grim portrait of people living on the margins, born without hope or expectation who turn to crime for easy money. His understanding of the criminal psyche ensures it’s horribly true to life.

Because this story is set lower down the criminal scale there’s no big houses, nice clothes or cars. Here his cast follow the unrelentingly brutal law of the jungle and the few good guys are powerless in the face of uncompromising violence.

The Night the Rich Men Burned is dark, grim, violent and squalid. This is not a happy book – but it’s a truly compelling read. We all smiled at the welcome Glasgow gave the Commonwealth Games. This is the side of the city the PR people wouldn’t want you to see. Mackay ensures you won’t forget it’s there.