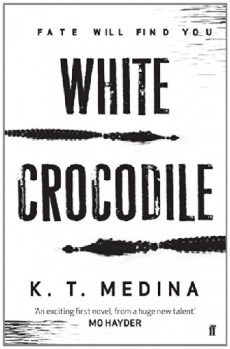 Tess Hardy is clearing mines in Cambodia, trying to find why her husband died, and whether the feared White Crocodile holds the explanation.

Cambodia is a desperately poor country, and even the naturally fertile ground is problematic when thousands of land mines still bring mutilation and death. Tess Hardy is recently arrived in Battambang to work with the NGO Mine Clearance Trust, but things are not right. Young woman are being murdered or disappearing from the villages close by, victims, say the locals, of the supernatural White Crocodile.

MCT staff have also suffered casualties: on her second day one of Tess’s colleagues is maimed by a mine and Tess discovers this is not an accident. In fact, she is in Battambang to find out why her violent estranged husband Luke died there. Luke was experienced in mine clearance, and in his last telephone messages home showed signs of anxiety. Tess keeps her suspicions quiet while she investigates.

The explanation for these events, and revelation of those responsible, take up the whole of the book and are finally revealed only in the last few pages. However, clues are given in two other narratives, episodes of which regularly interrupt the main story. The first is of a police investigation following the discovery of the body of a young Asian woman in a wood close to Manchester airport, and the second is the harrowing tale of a 1990s child victim of a drug addict mother and her violent and abusive boyfriends.

Cambodia comes across in a powerful way: the heat and humidity, the lushness of the vegetation and the decrepitude of the buildings and roads, and the very basic and precarious standard of living the locals are afforded. Few of them are given space in the book, however, and then only as victims and objects of pity: the focus is firmly on Tess and other members of the MCT team.

All of these co-workers have problems: the disorganised MacSween, who heads MCT, his uptight deputy Jakkleson, the Bosnian Alex, and patrician laid-back Johnny, not to mention Tess herself, and her former husband. Not one is the level-headed person you would hope to see engaged in mine clearance; they all have troubles related to events in their past. Whenever you are privy to their thoughts, they are in mental anguish. While this makes for drama, and helps to obscure the culprit, a song in one chord does become very wearing.

This is K T Medina’s first book, however, so perhaps it is unreasonable to expect complete perfection. There is certainly much to like. The equivocal nature of Western charitable aid is a theme of interest. The author is said to be an expert in war materiel, and what technical detail is included is confidently handled; more of this would be welcome. A follow-up to White Crocodile is keenly anticipated.