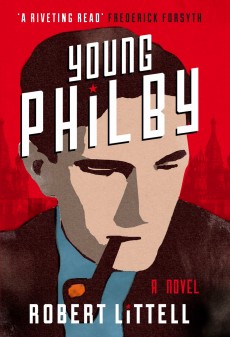 Kim Philby fled Beirut aboard a Russian ship that sailed so hurriedly it left much of its cargo on the dockside. Cleared by a British inquiry through lack of evidence, the former senior intelligence liaison officer in Washington had spied for the Communists for more than 30 years.

Robert Littell is the man often compared to John le Carré – the major difference being that le Carré had his intelligence career cut short by the intervention of Kim Philby – but both bring reality to their work with a concentration as much on the bureaucracy and boredom of espionage as on the betrayal or chase.

Young Philby, now out in paperback, is a masterclass in spy writing, matching Littell’s classic fictional history The Company: A Novel of the CIA. But it’s all too Hollywood for me.

Fact: Harold Adrian Russell Philby, best known by his nickname Kim after the Kipling hero, was the greatest traitor in modern British history. Together with the other members of the Cambridge Five – Guy Burgess, Donald Maclean, Anthony Blunt and possibly John Cairncross – these privileged young men spent the better part of 30 years selling out their country to Communist Russia.

But it was Philby, at one time senior British intelligence liaison in Washington, who did the most damage – no one has ever admitted how many agents died because of his treachery.

This story about his early life through the eyes of several different narrators – Russian recruiters, Moscow Centre, Burgess, MI6 and former lovers – is a short and sharp thriller, loosely based on historical fact.

Littell has an authoritative grasp of European history from the socialist uprising in Vienna and the Spanish Civil War to the rise of Hitlerism and Stalinism – and an outstanding narrative technique.

The book is delivered as a series of testimonials, documents and letters as we follow Philby’s career. Briefly we get his own perspective – frustratingly it’s of the phoney war in France in 1939 – but there is nothing to explain his real motivation.

That’s where Hollywood comes in as Littell suggests this odious man was in reality a veritable superhero of espionage – a claim apparently based on his long friendship with James Jesus Angleton, the counter-intelligence director of the CIA, who in fact, on more than one occasion, expressed his doubts about Philby’s true masters.

When publishers put out a novel in the UK, why don’t they employ an English editor to change the too obvious Americanisms – words and phrases no well brought up, upper-class young man educated at Trinity College in the 1930s would never have heard of, let alone use. That said, the dialogue is great, the characterisation first-class – if you don’t know the true sordid story – and occasional bursts of humour add to the authenticity and pace of the narrative.

I hated this book – but if you don’t know or don’t care about the truth behind it, this is a superbly written and absolutely riveting piece of espionage fiction which you will struggle to put down.