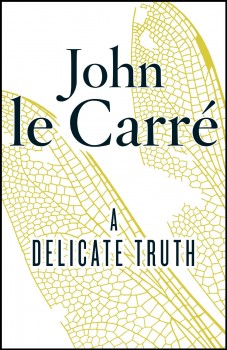 Toby Bell, a rising star in the Foreign Office, comes across information that points to a conspiracy that had involved his own Foreign Minister. He has to decide whether to turn whistle-blower and finds himself in constant danger.

Alec Leamas and Jerry Westerby are characters in le Carré novels who find themselves confronted with a situation in which they have a choice between acting honourably, as they know they should, or allowing evil to have its way. It is never as clear as that but they are able to recognise when the moment for a decision arrives.  Toby Bell in this novel is another such. Toby - in spite of the name - is not the typical public school/Oxbridge-educated career diplomat, though he has had the great advantage of having been the protégé of someone who was.

With that sort of assistance, Toby has come up through the ranks with amazing speed and when we meet him he is the private secretary to a cabinet minister. Unfortunately, the minister is frequently disinclined to let Toby in on what he is doing. He spends a considerable amount of time alone and even goes so far as to lock the door of his office behind him. However, when on one occasion he gives instructions to admit two people secretly into the building, and then into his office for a briefing, Toby decides to find out what is going on.

The book opens in Gibraltar with the consequences of that briefing. ‘Paul’, the Foreign Office man, has been recruited, along with three ex-soldiers led by Jeb, with a view to the capture of a Jihadist terrorist. It is a very gripping and vivid opening and it is obvious that no one knows exactly what is happening - or even what is supposed to happen. The story moves back and forward in time, tending to suggest, as often in le Carré, the complexity of the plot. Certainly the reader has always to pay attention. It is noticeable in this Gibraltar episode that instructions given by the senior men are always issued with a view to self-justification afterwards and it is this political double talk and desire for self preservation at all costs that we find so disturbing.

The honest men - Toby, Kit and Jeb - struggle to make their voices heard. Even the mid-level civil servants acquiesce in a cover-up on orders from above - something they do not do simply willingly but with the enthusiasm that consideration of their career prospects demands. Le Carré has presented us with this proposition on many occasions – in order for evil to triumph it is only necessary for good men to do nothing. The good men do try to right a cruel injustice but there is no guarantee of their success and in one case tragedy ensues.

This intellectualising does not diminish the novel as a thriller in any way and the reader becomes absorbed as events move at pace with very surprising results. Nor is it only the story line that makes the book so gripping. The characters are all carefully drawn - from the honest and dependable former soldier, with his desire to bring to account those responsible for the murder of two wholly innocent civilians, to the callous, self-serving and corrupt Foreign Secretary. It is a comment upon the inclinations of politicians in any age, one that le Carré made half a century ago, and which remains as true now as it was when Leamas decided enough was enough.