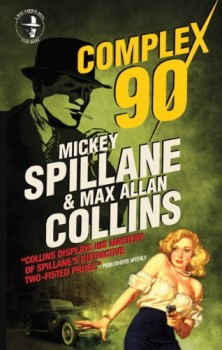 When a PI is shot dead at a society party where he and Mike Hammer are providing security, Hammer takes on his job accompanying a conservative Senator to Russia. Kidnapped, he shoots his way out, leaving a trail of bodies and returns to America to find he is wanted by both sides in a Cold War threatening to heat up.

For the oldies like myself who remember the world as it was before PC, the best news of the crime publishing year is that Titan are re-issuing some of the later adventures of the Big Daddy of all private investigators, Mike Hammer.

These are based on unfinished stories by the immortal Mickey Spillane, polished for publication by his friend and collaborator Collins. And in case you think they're not the real thing I compared both style and content with my dog-eared copy of The Big Kill (1951) and can't tell where Spillane leaves off and Collins begins.

Hammer is the John Wayne of popular literature. Deeply conservative (with a small 'c'), ridiculously wedded to the idea of the individual's freedom of self-expression, totally patriotic, willing to bound, rather than step, outside the restrictions of the law to achieve rough justice, he is a man of principle and calibre – or as he puts it: ".45 calibre."

He is also incurably sexist, a regular smart-ass – and to a large extent a reflection of the majority of America of his times, brashly convinced of its God-given right to run the world in its own image.

The New York-based detective was a prototype for generations of PIs – and more than a few self-willed regular policemen. But unlike many of his descendants he doesn't suffer from self-doubt, stress, PTSD, or any of the now fashionable defects.
His only concession to weakness was that after his former OSS operative partner and lover, the wonderful raven-haired Velda, disappeared inside Russia for seven years he hit the bottle, but in typical Hammer style brought his drinking under control by sheer willpower after her rescue.

When a PI friend is shot dead at a New York society party where he and Hammer are providing security and Hammer himself is injured, he takes on the job accompanying a conservative Senator to Russia. He’s kidnapped, but shoots his way out, leaving a trail of bodies and returns to America to find he is wanted by both sides in a Cold War threatening to heat up.

From there the plot moves at a bewildering pace into Russian spy rings, the space race, the dishonesty of insider politics and the duplicity of the alphabet soup of agencies that comprises American 'intelligence'.

As usual, Hammer makes Rambo look what he is – a mere copyist amateur in the business of reducing the world's population of baddies. But the ending shows Hammer in a new light as a man prepared to take vengeance for vengeance's sake.

Complex 90 is a wonderful reminder of what thrillers used to be. It’s unrealistic, but hugely exciting and entertaining. If you're too young to have been brought up on Spillane, try this. Spillane-Lite it ain't – it’s a worthy follower of a great tradition.