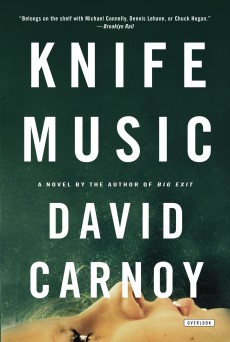 When a bright, attractive teenager hangs herself after her mother discovers her diary in which she confesses to sex with the surgeon who saved her life, Detective Hank Madden must decide whether her death was suicide – and prove whether the doctor was involved or not.

Knife Music is a doctor versus detective thriller with that favourite American theme on an innocent man battling to clear his name. In fact, it is so much more. Brilliant research, both medical, procedural and legal and carefully drawn and developed characters make this a crime purist’s dream – and also totally believable. There’s no violence – but it’s an American book, so there is one fairly low-key piece of gunplay at the end, but even that is totally in keeping with the story. It’s nothing but a good story, really well told.

When a bright, attractive California teenager hangs herself in the shower after her mother discovers her diary in which she confesses to sex with the surgeon who saved her life after a car accident, Detective Hank Madden must decide whether the girl’s death was suicide or what California state law calls ‘foreseeable harm’ which can land the person held responsible for provoking the action on a murder charge.

He must also prove whether the doctor, who completely denies the allegation was involved or not – not so much a who-dun-it as a did he do it at all?

Madden is a good policeman, experienced, steady and careful. From the off he has doubts about making a homicide case, even questioning what appears an eye-witness account of the sex act. But he also has a problem – as a child he was assaulted by a doctor and must battle to deal with his natural bias towards believing the surgeon’s guilt.

The careful and sympathetic development of the depths and shades of Madden’s character and that of the other principals and even the minor players in this story is its greatest strength. Dr Ted Cogan, the accused trauma specialist, the dead girl’s closest friend, her brother and the other members of his college ‘frat house’, Madden’s police colleagues, Cogan’s former girlfriend lawyer and others all spring from the page as real people with real lives and real problems.

Carnoy’s not just a clever writer, he’s also the master of the old Hitchcock trick of disguise. Cogan, who some may think is often not a terribly nice person, blunders through his search to prove his innocence and as Madden comes more and more to doubt his guilt, this gripping and suspenseful story moves to a natural and signposted conclusion.

Wrong! I totally failed to see the end coming and any reader who manages to pick up the one earlier clue should apply for a job with the Serious and Organised Crimes unit!