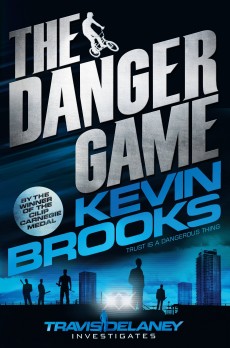 A routine enquiry for Delaney & Co leads to a brutal beating for one of their employees and takes Travis deep into the world of gang warfare on the Slade Lane estate.

Since Travis Delaney’s parents were killed in a car crash, he’s lived with his grandparents, providing a nice mix of generations in Kevin Brooks’ engaging young adult series, now billed as Travis Delaney Investigates. The investigation is done under the aegis of Delaney & Co, the firm of private investigators set up by Travis’ parents and now run by his granddad, a veteran of the Royal Military Police and the Army Intelligence Corps.

At first sight, their latest jobs seem rather mundane. On behalf of a local firm of solicitors they’ve been hired to look into a backstreet tanning salon as part of a personal injury compensation claim for a disgruntled client. Running in tandem with this is Travis’ first solo investigation into a series of thefts from the changing rooms at his school.

On top of this, Travis has to tread carefully through the tension created by his granddad hiring a very old flame, Gloria Nightingale, to work with them in Delaney & Co. Travis doesn’t trust Gloria. He’s caught her sneaking around in his granddad’s office, and he’s also influenced by his grandmother’s dislike of the woman. Matters take a darker turn when Courtney Lane, an employee of the firm, is on the receiving end of a brutal beating, clearly designed to make them rethink their involvement in the tanning salon case.

Kevin Brooks does a good job with his teenage hero and his friends, bringing back characters I’d immediately taken a liking to in his first YA book, The Ultimate Truth, such as streetwise, tough Mason Yusuf and his minder, big Lenny, the very epitome of the strong, silent type. And he now brings in Mason’s clever, resourceful younger sister, Jaydie. There’s very little of the Scooby Gang about these kids. Jaydie and Mason live in a run-down estate where knives and guns are part of everyday life, and even an all-out gang war doesn’t faze them too much. They’re all old beyond their years but that’s a product of the lives they’ve led, not a simple artifice of the author’s imagination.

In many ways, the thing I like most about this series is the way Brooks bridges the generation gap and empowers his older characters as much as he does his younger ones. They’re all people you’d want on your side if your back’s against the wall, and it’s never wise to take any of them at face value. There’s a frisson of real danger throughout the book, and there were times when I couldn’t quite work out what sort of rabbit Brooks was going to pull out of the hat.

If you haven’t already made Travis Delaney’s acquaintance, remedy that now. You won’t regret it.