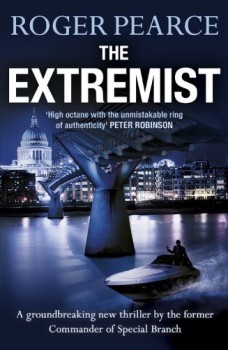 A series of apparently anti-American acts of violence and extremism threaten the UK’s much-vaunted special relationship with the US. DCI John Kerr has the task of identifying the connections and stopping the escalating violence.

Roger Pearce, former Commander of Special Branch, is now turning his hand to writing, and is bringing a refreshing taste of authenticity to the genre without over-loading the reader with ever-increasing minutiae of ballistics and weaponry. His armed response officers, nicknamed Trojans, come over as suitably threatening, but unfortunately, they arrive slightly too late when it really matters for undercover officer, Melanie Fleming,  forced to take a split-second decision, without knowledge that back-up is close at hand. Melanie opts to preserve her cover, but in doing so commits an act that threatens her marriage to fellow undercover cop, Rob.

That decision casts a long shadow over the rest of the events in the book, and DCI John Kerr’s decision to keep her operational is one that constantly returns to haunt him. But Kerr is a man under pressure, and he needs all the resources he can beg, steal of borrow, as a series of extremist attacks, deliberately pitched as old-style activism, begins to threaten the special relationship between the UK and the US. Americans are being ruthlessly targeted on British soil and the powers that be want the spate of violence stopped.

When I reached the point where the American wife of the British Defence Secretary is brutally murdered while walking her dog, I remembered that this was the one where I’d told the publicist that I wasn’t going to read the book unless she could reassure me that the dog survived. So on that particular plot point, as I’m now writing this review, I can no doubt safely leave you to draw your own conclusion about the fate of the canine companion. I think when I sent that email I’d had a surfeit of the often casual cruelty that crime writers all too frequently dispense to unfortunate animals. But in other respects, you’ll need a strong stomach to read The Extremist, as one particular act of violence makes exceedingly uncomfortable reading indeed.

In some respects, Kerr is a typical hard-boiled, maverick cop, but Pearce keeps him believable, which is no mean feat in crime fiction. The theme of the book is very much one of deception and its consequences, and I’m pleased to say that I didn’t see it all coming. With The Extremist, Pearce has built convincingly on a strong debut.