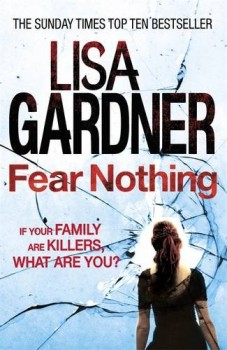 Despite being injured at the crime scene, Sergeant Detective DD Warren is investigating a murder. The evidence points to the sister of Warren’s pain specialist, serving life for murder, but a much more complicated story emerges that casts doubt on her original conviction.

Sergeant Detective DD Warren, injured after falling down the stairs when alone at a murder scene, is in excruciating pain. Unable to remember the accident and unable to work, she visits Dr Adeline Glen, a psychiatrist and pain specialist who, because of a genetic defect, is herself completely unable to feel pain. Adeline just happens to be the daughter of Harry Day, a notorious serial killer and the sister of Shana Day, sentenced to life imprisonment at the age of 14 for the murder of a 12-year-old schoolboy.

When a second identical murder follows, DD, working as an ‘unofficial consultant’ while on sick leave, learns that the murders bear an uncanny resemblance to those carried out by Adeline’s father who has been dead for 40 years. In particular, the killer removes strips of skin from the victim, keeping some as trophies. Suspicion falls on Shana Day, but as she is in solitary confinement in prison, it is hard to see how she could have been involved.

As the murders continue, DD is targeted. Could Shana be masterminding the murders from her prison cell or are they the work of a copycat admirer? And what is the role of Charlie Sgarzi? He’s a journalist looking to write a true crime book about Shana, as well as being the cousin of her schoolboy victim. As the team follows the clues, doubt is cast on Shana’s conviction.

Lisa Gardner writes in a combination of first and third person. In this book – the seventh in the DD series – it is Adeline who tells her own story, while the work of the police is described in the third person. As the book is very much about the family ties between Adeline, Shana and their dead parents and the nature versus nurture debate arising from their very different upbringings, this allows insights into the thought processes that lead Adeline to some apparently irrational actions.

The psychology of Adeline’s genetic problems, DD’s resistance to pain management and Shana’s anti-social personality disorder are all explored in the context of a gripping whodunit that had me guessing until almost the last page.