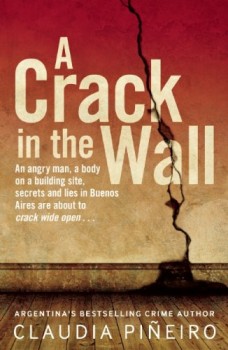 A Crack in the Wall

Architect Pablo Simo’s unsatisfying life is disrupted when an attractive caller awakens memories of a crime it was hoped had been forgotten.

When he was younger, Pablo Simo had real enthusiasm for architecture and dreams of achievement, but these days his time is spent cramming the maximum number of cheap flats on any site he can find. He is similarly disillusioned with his marriage, but doing nothing about his interest in Marta, a colleague who is probably having an affair with his boss Borla.

However, things start to change when Leonor, an attractive young woman, calls at the office seeking Nelson Jara, a man who disappeared three years previously in circumstances that Borla, Marta and Pablo are desperate to keep quiet. Pablo needs to find the reason for her interest in Jara, but has other motivations for staying in contact. As it turns out, Leonor is the key to big changes in Pablo’s routine and unsatisfying life.

The crime which Pablo and his colleagues are keen to conceal is at the centre of this story, but the book is less about the crime as much as the inner life of the protagonist Pablo, the re-assessment triggered by Leonor’s appearance and his progress to the eventual decision to make some changes. Through his eyes we find out plenty about residential development in Buenos Aires: land values push flats to the limit of affordability and the only way to make it pay is to get odd pieces of land at a bargain, squeeze every last square metre of sellable space out of them, eliminate every unnecessary peso in building, and promise purchasers anything they ask for, no matter how unrealistic.

As far as Pablo's home life is concerned, familiarity with his wife Laura has bred indifference in them both. The only issue with any emotional investment for either of them is their daughter Francisca, Laura being frequently emotional about Francisca’s adolescent behaviour and Pablo, to his wife’s frustration, on his daughter’s side. Pineiro presents a convincing picture. Leonor’s intrusion into Pablo’s life triggers an awakening to the realisation that his marriage is moribund, but that he does have options.

There is an awakening in Pablo’s professional life too. Here his options are limited by the way the development industry operates in Buenos Aires, but it turns out that these special characteristics provide the prospect of changing the way he earns a living.  The solution he finds is not perhaps entirely kosher, but an elegant response to difficult circumstances. Claudia Pineiro tells a credible story with an amusing twist at the end.