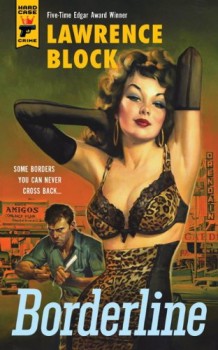 Several uninhibited characters cross paths on the US/Mexico border where a sociopath is on the run in this pulp fiction from the 1950s.

Marty is a professional gambler in El Paso, playing poker when he can find a game. He meets Meg, fresh from a quick Mexican divorce over the border in Juarez, glad to be rid of an oppressive marriage and looking for some excitement. Lily, a young drifter in town by chance, makes contact with some hipsters who she hopes will help her raise some cash, and ends up in a lesbian sex show with Cassie, one of her new friends.

While none of these characters are social paragons, their sins are venial compared to those of Weaver, with whom their lives eventually intersect. Weaver is a sociopath, on the run after the brutal murder of a young girl in Tulsa. Unfortunately this crime merely inflamed Weaver’s perverted appetites, and any woman in his reach is at risk of a horrible death.

For those unacquainted with the genre, this is pulp fiction crime writing that had its heyday in the 1950s, generally characterised by the cheapest paper and lurid covers. Quality writing such as Zola’s Nana or Steinbeck’s East of Eden are also found in such editions, but pulp writing should not be confused with such: the word pulp also applies to the contents, for good reason.

The book begins with three pages of ‘raves’ for Block’s work from several popular writers as well as a wide range of US print media, stressing the riveting nature of his prose, the clarity of style, and the relentless build-up of suspense. Well…yes, but on the other hand the characters are cardboard and the plot transparently little more than a vehicle for Block’s sensationalist treatment of sex and violence.

For a book written in 1958 Block’s candid depiction of women with healthy sexual appetites was no doubt revolutionary for its time, and a liberating tendency towards puritan sexual attitudes is no bad thing. But the salacious focus on detail, the big breasts, lesbian action and so on suggests that this is more accurately described as male masturbatory fantasy. Likewise, the exploration of Weaver’s psyche is focussed on his wild dreams of cutting and slashing, and there is a most unpleasant episode in which he visits his worst impulses on a poor unfortunate, apparently written to titillate.

It can of course be argued that the cynical exploitation of the least endearing aspects of human nature provides readers with a harmless outlet for their baser impulses, and there are some views that Block’s work in particular has technical merit. Where the characters are so far from being believable, however, a diet of such work leaves the reader with a hollow feeling. A bit like a diet of chocolate marshmallows - you might enjoy one occasionally, but frequent repetition is likely to leave you feeing a bit nauseous.