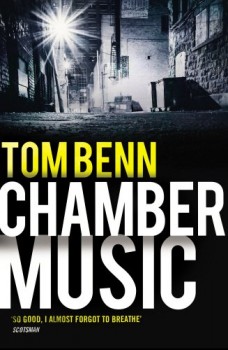 Henry Bane, on his way up in Manchester’s gangland, must face the challenge of Yardie Hagfish and his dreadful ally Mary. At the same time a woman from his past has reappeared, bringing even more trouble with her in the shape of a new boyfriend.

Tom Benn is one of the dark new faces of noir. His spare style has even been described as like a haiku. And to some extent this is true. His sentence length and construction is street-real. Every word is in its place. For a young writer, his command of the life and language of the genre is remarkable in what is the second of his series featuring the Manchester gangster Henry Bane.

The wake for Bane’s late father is interrupted by the arrival of a woman from Henry’s past after an eight-year absence. She brings with her from London a new boyfriend, shot and wounded, and a world of trouble. At the same time Bane’s rise through the underworld ranks is challenged by the appearance of Hagfish, a half-mad Yardie with a fearsome pet and plans to unseat the local ganglords.

Cue an incredibly violent and brutal turf war – tied in Bane’s case to personal problems with his former love and current live-in girlfriend. The story races from gun battle to torture, drugs deal to often violent sex – there’s little place for humanity or love in this world. Imagine Lock, Stock And Two Smoking Barrels on speed and you won’t be far wrong. Guy Ritchie is just a pussy cat, though, compared with this unrelenting stew of violence and vice, leavened occasionally by some pretty grim humour.

This is undoubtedly a book for younger readers. The more staid may find the unrelenting nastiness and near pornography of the violence too strong and older aficionados of the genre may well struggle with the language – the whole story is in dialect, either the flat Manc twang or patois, and in parts requires some serious study for those born south of Watford Gap and north of Kingston, Jamaica. Constant references to bands or songs many readers will never have heard of don’t help either.

Bane’s apparently unstoppable rise to the top of a filthy pile – hardly interrupted by Greater Manchester police who seem to be either a joke or totally non-existent – is due to continue in a third book out later this year.