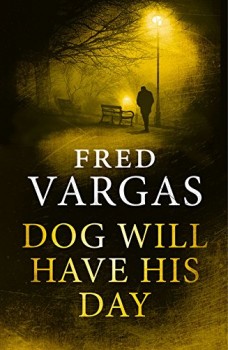 Dog Will Have His Day

Whilst keeping watch on the occupant of a house in Paris, Louis Kehlweiler, now made redundant by the Justice Department, spots something that turns out to be a small human bone. In spite of being ridiculed by the police when he takes it to them, he decides to investigate.

The cover to the book states that this is a ‘three evangelists novel’. This was the title of the book that introduced us to three scholars, all of whom are interested in criminal detection. Marc is an expert in medieval history, Mathias in pre-history and Lucien in World War 1. They make good use of their scholarship and fascination with detail to investigate strange events which turn out to be criminal.

Anyone looking for a repeat of their exploits in this book might be slightly disappointed because the description is somewhat misleading. Not only does it contain only two of the evangelists, but both are also very much secondary characters. The murder investigation is primarily undertaken by Louis (Ludwig) Kehlweiler, formerly of the Justice Department, where he was known as ‘The German’, but now no longer employed there and working in essence as a freelance.

The circumstances of Kehlweiler leaving the Department are not made entirely clear but it seems that professional jealousy and distrust played a large part. The odd thing is that he continues to operate as a special investigator with a passion that amounts to obsession. He keeps copious records and has many contacts throughout the country who will assist him whenever the need arises.

This is something the reader has to take on trust because there is no indication of how, since he is essentially unemployed, he manages to make the money that allows him to pursue his calling so single-mindedly. The two evangelists, Marc and Mathias, appear similarly untroubled by the business of actually making a living.

A further suspension of disbelief is perhaps required in order to be convinced of the way in which the dog is found to have come from Brittany – identification based on just one small piece of bone. However, once that point is reached, the story never flags for one moment. It is very inventive, imaginative and thoroughly believable.

Kehlweiler finds himself following the clue of the bone to a Breton village where he discovers that an old woman had recently died as a result of a fall on the rocks along the beach. He is able to prove that this was, in fact, murder and goes on to establish a link with another death, which took place a few years before, involving people living in the village, and feels that it must be connected to the murder he is investigating.

Things, however, are not as simple as they appear, particularly when the murderer is so obviously highly intelligent and more than capable of misleading even somebody as careful and committed as Kehlweiler. There are plenty of surprises in store, including one, which occurs when the mystery appears to be finally solved.

However, good as the plotting is, there are minor weaknesses. It is difficult, for example, to see why the author includes an episode that dates back to wartime and has no connection with the murder investigation. Similarly, there seems little point in the introduction of Pauline, Kehlweiler’s former lover who left him for reasons never explained. She seems to be the basis for some interesting development that never actually occurs.

The greatest attention is paid throughout to making the characters – even the minor ones – live and breathe. Kehlweiler himself is something of an eccentric as anybody must be who carries a toad in his pocket for company and conversation. He is totally obsessive in pursuit of the murderer and is quite prepared to disrupt the lives of others, particular that of Marc, in order to obtain the assistance he needs. Marc, whilst being very anti-authoritarian, is quite prepared to defer to Kehlweiler’s greater investigative experience. The conversations between the two are always witty and entertaining, as are those which involve the elderly prostitute, Marthe.

This is an altogether entertaining book for those who like writing with a difference, very personal, witty and intriguing. For those who enjoy intelligent crime writing, there is a neat plot with plenty of twists and surprises, but always with a sense of humanity.