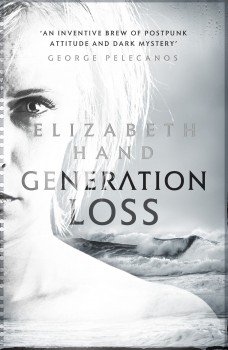 Cassandra Neary, a New York photographer, visits a backwoods island to interview an early inspiration, but finds horror and death.

The arrival of an urban sophisticate in some rural backwater with hostile locals and a dark and terrible secret is not an original plotline, but is given a new twist in Generation Lossby the nature of the protagonist: Cassandra Neary is as dark a heroine as is likely to be found, even in crime fiction. Kleptomaniac, habitual drug user, obsessed with death and with a default setting of hostility, Cass challenges the reader’s patience, and it is only the sense that she is damaged and suffers that engages empathy.

Elizabeth Hand is the author of more than a dozen previous books, but this seems to be the first outing for Cass Neary. The character is interesting enough to generate interest and a sequel, Available Dark, is already on sale. Some may have doubts about Neary: are her  punk credentials merely a style choice, a rejection of corporate manipulation, or what? And in any event hasn’t the essence of punk long been absorbed into the mainstream? But there is something appealing about Neary’s disinclination to conform, and told in the first person her story feels surprisingly convincing.

The book starts with Neary in her 40s, in New York. Her minor success with a book of photographs and engagement with an animated punk scene is some 20 years behind her. After a near-fatal stabbing and a belligerent relationship which ended in death, Cass lives quietly, working in a bookstore stockroom. The action begins when she is asked to visit Paswegas Island, off the coast of Maine, to interview the reclusive photographer Aphrodite Kamestos. Cass is initially resistant but, as Aphrodite was her initial inspiration to take up photography and has reportedly requested her by name, is persuaded to make the trip.

Her destination turns out to be dark, both actually and metaphorically. By the time the island comes in view, the weather has turned cold and stormy, with grey skies, sleet and snow. The locals view her with suspicion. Prominently displayed are posters about a young man who has recently disappeared, and the young daughter of the owner of Cass’s motel also goes missing within a day of her arrival. On the island itself she finds the remnants of a one-time hippy colony, and rejection from Aphrodite, about whose wishes she has been misled. But more than this, there is a terrible secret waiting to be discovered.

Generation Loss moves along at a rapid clip to a gripping climax, but the book is given depth through an interweaving of consistent elements in Neary’s life, including her mourning for her ex-lover, and her commitment to photography of an elemental kind. The result is an integrated whole that compels the attention.