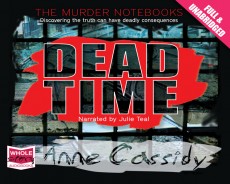 When Rose and Joshua’s parents go missing, everyone is baffled, including the police, but Joshua is determined to find them again.

Rose and Joshua meet when Joshua and his father come to live with Rose and her mother. The two kids get on well, but their world is turned upside down when their parents go out for an evening and never come back.

To appropriate the immortal words of Lady Bracknell, to lose one parent may be regarded as a misfortune, to lose two looks like carelessness. But for Rose and Joshua there was no carelessness involved, certainly not on their part. There had been no rows, no clue at all as to why two seemingly happy adults should simply vanish without trace.

The two are split up, and Rose is sent to live with her grandmother, a cold and seemingly uncaring figure who does little to welcome Rose into her home during her holidays from boarding school, or to make up in any way for the loss of her mother and the boy she’d become close to.

When Rose goes to a new college close to what is now her home, even though it still doesn’t feel like one to her, she’s over the moon when Joshua gets in contact with her again. Despite her grandmother’s disapproval, they meet up again, and Rose discovers that Joshua hasn’t stopped searching for their parents. He even has a couple of possible leads.

But Rose’s world is thrown into even more turmoil when she becomes involved in not one, but two murders. Both victims are at her college, and Rose is certain that there is a connection between them, but it’s clear that the police want her to keep her nose out of their business.

The key to any young adult novel is how convincingly the author can write their teenage protagonists and Anne Cassidy passes that test with flying colours. These aren’t adults in the guise of someone younger, these are real teenagers. I was soon caught up in Rose’s troubles, seeing things from her point of view, railing against her grandmother’s lack of empathy, sharing her frustration with the police, and becoming quickly invested in her complex relationship with Joshua, her not-quite stepbrother.

It becomes clear quite quickly that Dead Time is the start of a series, so there’s no point in expecting all the loose ends to be neatly tied up at the end, but I was sufficiently caught up in the lives of Rose and Joshua to want to stay on board for the rest of their investigations. This is a well-paced, engaging crime thriller, and Julie Teal’s perfectly-pitched narration lends veracity and depth to all the characters. She’s equally at home with both the protagonists, which isn’t an easy trick to pull off.

Anyone who’s been following Harlan Coben’s Mickey Bolitar series will no doubt want to know why mysterious butterfly tattoos and missing parents are in vogue on both sides of the Atlantic, and hopefully both series will eventually provide the answers!