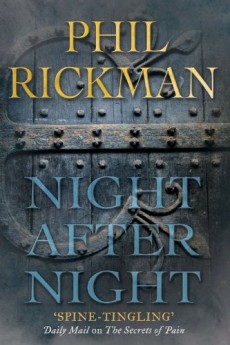 A group of sceptics and believers are brought together for a week in a supposedly haunted house, under the all-seeing eye of the TV cameras.

A supposedly haunted house in the Cotswolds plays host to an unlikely collection of sceptics and believers in the paranormal as Hunter-Gatherer TV makes a bid for the late-night ratings with a potentially explosive mix of Most Haunted and Big Brother – although Most and Haunted are two words that producer Leo Defford certainly doesn’t want to hear spoken anywhere in his vicinity.

In Night After Night, Phil Rickman brings back some characters that anyone who remembers him from his days writing as Will Kingdom will immediately recognise: Journalist Grayle Underhill, cross-dressing shaman Cindy Mars-Lewis and his rather sinister sidekick, Kelvyn Kite, and Marcus Bacton, now retired and writing a book. It seems a long time since I first made their acquaintance in Mean Spirits and picking up Night After Night was rather like meeting up with a bunch of old and decidedly eccentric friends.

Knap Hall, lying in the shadow of Cleeve Hill and the Neolithic chambered long barrow Belas Knap, was previously the home of the glamorous Trinity Ansell and her husband Harry, a man who attempted to appropriate some of her magnetism along with her name. But Trinity died and the hall started to fall into disrepair again until Harry struck a deal with HGTV, on the look out for an unknown location for their reality TV show, where a bunch of fading celebrities could attempt to rekindle their careers under the spotlight, or in this case by candlelight, as they sit around, tell ghost stories, and generally play to the unseen audience.

It’s a volatile mix and Rickman pulls off the difficult trick of making it all seem very real indeed. Normally any attempts to recreate the world of TV and its trappings of celebrity on the page always – to me, at least – seem doomed to failure, but characters like seemingly sceptical TV comedian Austin ‘Ozzy’ Ahmed, positively leap off the page, and could all too easily have been a contestant on Celebrity Big Brother.

No-one better straddles the sometimes uncomfortable divide between crime and the supernatural than Phil Rickman, always leaving you wrong-footed about what to believe and not believe. There is the usual mix of genuinely creepy scenes with the sort of psychological shenanigans that he manages so well. Nothing is ever quite what it seems, but for me, trying to figure out what the hell was going on took second place to the glory of the ride, so to speak. This is definitely spooky crime at its finest, despite the almost deceptively slow pace.

In the phrase my co-editor is so fond of, I would read this man’s shopping list, and knowing Rickman, it would be written in his own, definitely inimitable and wholly lyrical style. So settle down, preferably in a well-lit room, and prepare to take a trip into the dark heart of the Cotswolds, which, by spooky coincidence, your editors visited only a couple of weeks before Night After Night landed on the reading pile, when I slogged up the long slope to Belas Knap while Sharon did the sensible thing and lounged around on the edge of the field.

Do you believe in coincidence…? Hmm, well I thought I did, but now I’m not so sure…