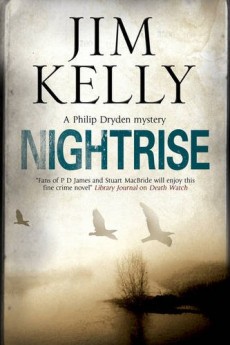 Journalist Philip Dryden is told by police that his father has been killed in a car crash - except, he drowned 35 years previously.

Philip Dryden is a former national paper journalist working on a tiny weekly – The Crow – in Ely. He'd moved out there to be near his wife Laura, who was in a coma for two years. She's now out of hospital, partially recovered, and they have a baby. And Dryden has reluctantly left his houseboat to move into a house on land – called Flightpath Cottages for a good reason, given its proximity to the air base at Mildenhall.

This is a series I've always loved. The books are well-plotted, witty and beautifully-written. Jim Kelly has moved publishers and also taken a break from his Peter Shaw series set in East Anglia, which never really grabbed me in the same way.

After a five-year break, Dryden is back in book number six. And as usual, it's a twisty plot with seemingly random events unfolding at a leisurely pace. Nightrise kicks off with the police informing Dryden that his father has been killed in a car crash - except that he drowned during floods 35 years previously. A body is found hanging in the middle of a lettuce field. And a couple where the husband is threatened with deportation want Dryden to report on the fact that the local council has buried their baby daughter in a pauper's grave without permission.

Kelly strikes a clear balance between the professional and the personal for Dryden. Humph the taxi driver is still ferrying the reporter around, doing a bit of investigating himself, aided and abetted by Boudicca the greyhound, and now learning Estonian (which has its uses in Nightrise) – although I'm sure he learned that in an earlier book!

The writing is understated and elegant, bringing with it a clear picture of the Fens, the people who live there and the unpredictable weather. Coupled with Kelly's dry humour, his sure feel for the history of the area which informs all his plots, and his eye for the quirky detail, it all contributes to a book that is absolute delight.