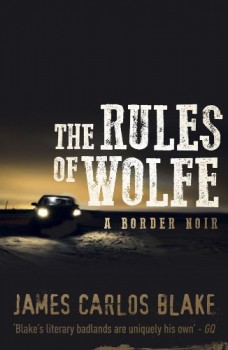 The Rules of Wolfe

At a Mexican gang lord’s isolated retreat Eddie Gato Wolfe is caught with one of his boss’s girls, and the pair take off across the Sonora Desert in fear for their lives.

Eddie Gato is an obscure scion of the powerful Wolfe family of Texas, with interests both legal and otherwise. He’s frustrated when told he is not ready for an active role in the more dubious of the family’s activities, and takes a job as a guard at an isolated hacienda at the foot of the Sierra Madre in Mexico.

The Rancho del Sol is a retreat maintained by gang boss La Navaja for occasional recreation for himself and his captains. Eddie likes the look of one of the girls brought along, and when the feeling is reciprocated the pair end up in bed. Unfortunately they are discovered, and a grisly death is bound to follow for both unless they can make it to the US border. Eddie has a few tricks up his sleeve, but the resources pitted against them are fearsome and survival looks to be a very long shot.

It is always great to come across a writer that you like but have not previously heard of, especially when there is a sizeable back list ready for exploration. Blake’s depiction of Mexican gangs feels entirely authentic and is as chilling as can be imagined: death and torture are routine events and treated as such. The excitement of the chase, a litany of bloody events, is however rendered in a spare and disciplined way and none of the violence is gratuitous or over-dramatised.

The power of La Navaja is truly frightening, and his dispositions on arrival at Rancho del Sol to take control of the chase put one in mind of the operations of a medieval warlord, pitilessly dedicated to the maintenance of his authority. A power structure in which control is so focussed on a single person is of course inherently unstable, and any hint of weakness renders the leader liable to the ultimate penalty.

To have a chance, Eddie needs assistance from the Wolfes, in the shape of Rudy and Frank, active representatives for the more illegal side of the family operations. The Wolfe family is long-established and has a pretty good grip on anything which generates money in its little corner of Texas. I suppose that in a tale featuring Mexican drug gangs, the question of morality is somewhat moot, but notwithstanding the charming tales about colourful members of the Wolfe family there doesn’t seem to be much justification for their corruption.

Putting ethics aside, the book is gripping from the start and is difficult to put down. The use of the present tense, and the frequent omission of inverted commas for reported speech, which can be irritating, are easy to overlook when you are eager to get to the next page. The Rules of Wolfe is ‘border noir’ indeed, and a wild ride.