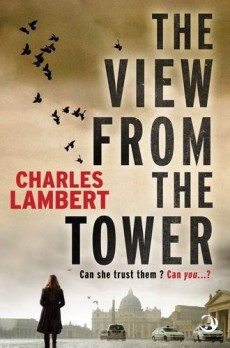 The View from the Tower

Helen di Stasi is in a Rome hotel with her lover, when her husband Federico, a senior civil servant, is assassinated. In trying to discover why, she finds herself in a murky world of half truths and betrayals – and must face her own past.

This second of a trilogy about the darker side of life in Rome is a complicated, intricate tale of love, betrayal, and the damage caused when ideals clash with practicality. It deals with politics, revolution, violence and murder, but is at heart a brilliant portrait of relationships, secrets, and the shock of discovering you didn’t know your long-term partner as well as you thought.

British-born Helen di Stasi is with her lover when a gunman assassinates her civil servant husband, Federico, who was in charge of a controversial privatisation programme. In trying to discover the truth, she must face her own past – with her husband and her lover, his closest friend, all once involved with the Brigatto Rosso, the Marxist revolutionary movement of the late 1970s – and finds herself in a web of suspicion involving those closest to her.

Had Fede, part of the establishment he once despised, really changed? Could her lover, Giacomo, a convicted ex-terrorist now living a high-profile life, be involved? What does her mother-in-law, the right-wing matriarch senator Giulia, have to do with her son’s death? Helen quickly comes to realise innocence is the first victim of politics.

This intriguing and exquisitely written thriller isn’t an easy read, but Charles Lambert manages to involve you with his characters – even the more dubious – and his wonderful and perceptive descriptions of Italian life give the story genuine authenticity.

Set in 1978 (the year the Red Brigades kidnapped and murdered former minister Aldo Moro) and 2004, Helen’s journey through past and present leads her to realise they are irrevocably fused – Giacomo’s revolutionary slogan of individual sacrifice for the common good pointing up the prime minister’s insincere and self-serving reaction to Fede’s death. Lambert doesn’t name him, but his description of Silvio Berlusconi is as accurate as it is damning.

Some of the descriptions of Helen’s struggle to deal with her loss are heartbreaking, but this tale has no real heroes or villains. Each character has their own shortcomings – but these are very real people in an equally unreal political world.

This sense of unreality gradually builds a tension which is always just beneath the surface. There’s nothing simple about this sophisticated and slow-burning story as it builds towards a conclusion you might expect from this world of smoke and mirrors. This is how a psychological thriller should be.