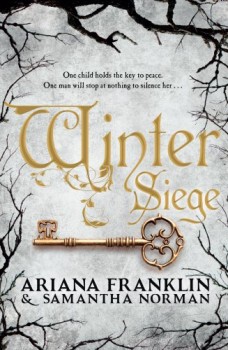 As the Empress Matilda, only surviving child of Henry I, and her cousin Stephen battle for the English throne, two women from very different backgrounds struggle to survive as bands of mercenaries burn, rape and loot their way across the country.

When journalist Diana Norman, who produced her most successful books under the pen name of Ariana Franklin, died in 2011, historical fiction lost a talented author. Her heroines – particularly fiery medical examiner Adelia Aguilar in the Mistress Of Death series – were intelligent and very real women facing the problems of life in a brutal age where females were regarded as either brood mares, sluts or servants.

Norman left behind a final stand-alone manuscript, now completed by her elder daughter, another journalist – and in many ways it’s the best of the lot and a superb memorial to her ability to meld medieval history with a first class thriller and make it all totally believable.

She draws the reader effortlessly into a world of the past with a style which reflects her own influences – those great storytellers Tolstoy, Dickens and Austen and more modern writers like Raymond Chandler, whom she interviewed, and spymaster John le Carré.

There are shadows of them all in this pulsating 12th century tale of two women from very different backgrounds struggling to survive as bands of mercenaries burn, rape and loot their way across the country ‘While God and His Angels slept’, as the Empress Matilda, only surviving child of Henry I, and her cousin, Stephen, tear England apart in a battle for the throne.

Maud of Kenniford is heiress to a castle which dominates a key Thames crossing. Forced into marriage to a much older – and thoroughly disgusting – warlord, her sense of duty and the rocklike support of her nurse are all she has to sustain her until she becomes involved with her shy stepson and meets a disturbingly handsome mercenary leader.

Emma is a child of the Cambridgeshire fens. In the aftermath of the 1141 Battle of Lincoln, she is raped, brutalised and left for dead, another victim in a bitter winter of atrocities, by a sadistic and evil monk, concerned only with his own pleasure and advancement.

She is saved by a hardened mercenary bowman who raises her as a boy, trains her in his own skills and swears he will track down the monster who attacked her. His only clue is a fragment of parchment she was clasping.

Wherever they turn, they face danger, no more so than when they meet the Empress during her amazing escape on foot from besieged Oxford. But Emma has even greater problems – her own maturing into womanhood and the fact that she can remember nothing of her past.

This gripping tale of survival and redemption is by no means a ‘woman’s book’, although parts of it are incredibly moving. Written in contemporary language – Norman had a horror of what she called ‘gadzooks’ novels – this is no PC rant but a real old-fashioned thriller with decency, honour and love eventually triumphing over evil.

It’s beautifully written, acutely observed and historically accurate, and it reserves its biggest surprise for the final lines. All in all, it’s a fitting tribute to a great writer.