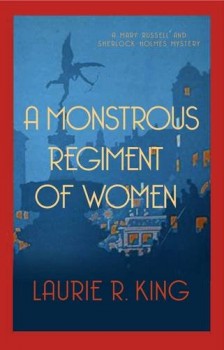 A Monstrous Regiment of Women

Mary Russell comes of age. In London she meets an old university friend who introduces her to a charitable women’s organisation run by the charismatic Margery Childe. But when several of its wealthier members are murdered, Mary’s involvement becomes her first solo investigation – with a little help from her mentor Sherlock Holmes.

It’s unusual to read a series back to front, but through some quirk this re-issue of Mary Russell’s second adventure reached me after the third – and I now fully appreciate Laurie R King’s ability to develop her character and fill in the background for future stories.

At 21 and about to come into a substantial inheritance, Mary Russell is at a crossroads. To a certain extent she has left behind her early training with Holmes, and developed her own life and career. In the hothouse academic atmosphere of Oxford she has become a fiercely independent young woman.

Mary escapes the boredom of what is to be her last family Christmas when a London friend introduces her to a charitable women’s organisation involved in the post-World War One suffrage movement, with a feminist slant on Christianity and run by the charismatic Margery Childe. Both Childe’s feminism and mystical theology fascinate Mary, but when killings claim several wealthy members, Mary begins her own investigation – with Holmes very much in the background.

Despite initial successes, events spiral out of control and her search plunges her into mortal danger as she confronts a cunning and vicious killer. Eventually Holmes becomes more deeply involved, leading to the formation of a fascinating partnership. The mystery plot is largely secondary to the story of Mary’s coming of age both as a detective and a woman after her superb debut in The Beekeepers’ Apprentice and coming to grips not only with her academic aspirations, but also her growing and changing relationship with Holmes.

The dialogue is great and the older Holmes completely believable. The concept of his mentoring an intelligent, independent young woman is an interesting and good one. King gets 1920s England largely right – although the idea of two well-brought-up young women discussing a man’s ‘sex appeal’ betrays her American roots. She also manages to poke some gentle fun at Arthur Conan Doyle’s fascination with mysticism and the attitudes of one or two of his original characters.

King’s own theological background enables her to give real bite to a clever account of early feminism by underlining the various mistranslations of scripture designed to keep women firmly in their place – and as a social, political and religious commentary the book works well. She also tackles the problem of drug abuse – then particularly rampant among young officers returning from the hell of the trenches – in part exculpating the original Holmes’ frequent sallies into addiction.

This is not so much a detective story as more a study in developing characters and relationships. It’s as if King feels she must get a lot of background out of the way before she can begin to treat her major characters as fully equal. The plot will wrong-foot you a bit because of the doubts over the motives of the mystic and in the end there is a good, old-fashioned, greed-motivated villain.

A Monstrous Regiment of Women is an excellent book, whether as a standalone or part of the series, whichever way round you read it!