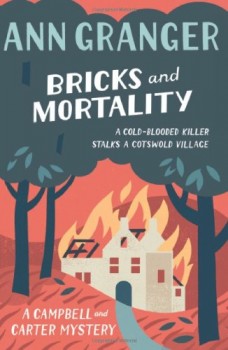 A dead body is found in a burned-out Cotswold manor house. Is it accident or murder?

There’s a glow in the night sky. It’s not light pollution but rather a local landmark going up in flames. By light of day a body is found in the blackened ruins. Who is it – and was it an accident or murder? Thus begins the third Cotswold mystery for Inspector Jess Campbell and Superintendent Ian Carter.

Key House has lain empty for years but local people keep an almost obsessively watchful eye on who comes and goes. A Grade 2 listed building needs someone to care for it. So it’s a mystery why the absentee owner, Gervase Crown, doesn’t just sell and be done with it. After all there is money to be made, and who doesn’t need money?  But then there can be other, less tangible reasons, for not doing the expected thing, as we discover.

Just when you think that you have a handle on what is happening you get a snippet of information that changes the direction of the investigation and this is what raises this book above other, more comfortable, Cotswold stories. There are also some great details that made me smile – just look out for who gets which cat mug!

There are plenty of local characters and some tragic village history to muddy the waters before the culprit is revealed, in a tale that could easily be a screenplay for a popular television series. The intricacies of village life are acutely observed and this observational detail means that characters are more than mere caricatures, though you will no doubt recognise those who may be found in most village communities.

The balance between the lives of the investigators and the mystery is just about right and I enjoyed the appearance of Millie (Carter’s daughter) and her bear, McTavish. This note of domesticity reinforces the cosy feel of this book, even though there is the almost obligatory clash between the home and working life of the police.

Bricks and Mortality is a satisfying, if straightforward, whodunit, perfect for a cosy evening by the fire.