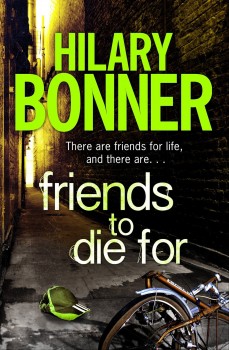 Friends To Die For

A group of friends meet every Sunday in a Covent Garden restaurant. But their lives are turned upside down when some seemingly minor pranks turn very nasty.

A group of friends meet every Sunday night at Johnny’s restaurant in Covent Garden. They’re a mixed bunch, but seem to enjoy each other’s company. And then the pranks start. When it becomes more than that, though, the trust between them all is shattered.

Hilary Bonner introduces us to a large cast smoothly and well. Interestingly, I had no problem remembering them all, but the characterisation is at times patchy, so several remain rather undefined. And at times they veer towards the stereotypes, with the excitable gay couple, the mouthy white van man, and the mysterious older woman.

Friends to Die For is a rather peculiar book with characters that might be described as quirky – or, in the case of the main plod, decidedly quaint. DS David Vogel is painted strongly as an eccentric and a fond husband, but suffers even more strongly from that problem of the genius cop, where it’s tell and not show. There really isn’t enough here for us to be convinced that he is a competent and respected detective.

I do like the idea of focusing the action on the area in and around Covent Garden. There’s not always a great feel for atmosphere – just mentioning road names doesn’t build up a picture – but the book benefits from this tight focus. And it’s not just the trendy market we see – it’s the less salubrious side of the area as well, as our friends come from wildly different backgrounds.

Aside from a fondness for exposition, some rather clunky dialogue and over-use of the annoying ‘had he/she but known’, Bonner moves the book along briskly. She’s at her best portraying the pranks that then become far more unpleasant and serious, and at showing how the trust between the friends is destroyed.

Friends to Die For is a quirky read that will keep you out of mischief if you don’t set too much store by the credibility of the police procedural side of things and if you skim the killer’s rather tiresome rantings. It may make you think twice about who you socialise with, though!