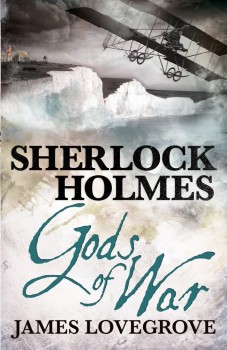 Watson is re-united with Holmes on a rare visit to his retirement home and the pair plunge into a whirlpool of ambition, obsession and murder when Holmes is engaged by a powerful industrialist to prove his son’s death was a suicide.

The Holmes revival rolls on. In various literary or televisual guises the world’s best known detective has been married, retired, transported to the 21st century to become an aesthetic, but always acerbic, Bond. Is there no end – or can we really not get enough of Sherlock?

Titan Books have invested heavily in the Holmes phenomenon with no fewer than three writers adding to the legend. Lovegrove, perhaps better known as a sci-fi author, is midway through a three book series with this clever mystery which presses all the right buttons for aficionados.

Set in 1913 and with the clouds of war looming over Europe, the plot is hardly new – a group of powerful men welcome the coming slaughter for their own ends and seek the influence of ancient gods to make it reality. Do I detect a flicker of recognition from Ludlum fans?

But Lovegrove is far too good a writer to fall easily into that trap. There’s tremendous action, brilliant characterisation, a realistic late Edwardian setting (Eastbourne hasn’t changed at all) and a clever character study of two active men coming to terms with the ageing process and coping with changing times and innovations such as motor cars, aeroplanes – and early women’s lib!

If knees creak and backs ache, the aging pair are still sharp in the mental department – Watson if anything has learned from earlier adventures and is a more perceptive contributor to the detection process than in the past as the plot unfolds in traditional style through hints and glimpses.

The doctor pays a rare visit Holmes’ retirement cottage on the Sussex downs where the great detective is raising bees, and the pair are immediately drawn into a jewel theft, which, while setting the scene for what is to come, also highlights Holmes’ growing boredom.

That quickly sorted, a stroll on the shore near Beachy Head leads to a grim discovery – and eventually a series of murders made to appear accidents, as a cabal of industrialists attempt to resurrect old gods in their quest for more power.

There’s the usual ration of theatrical cloak and dagger stuff, disguises, chases, secret societies and the obligatory thick copper who makes Lestrade look like a genius – all Conan Doyle staples recreated to enjoyable effect. And it is nice to see neither protagonist has lost his ability to escape the most threatening predicament, although the main enemy now seems to be the march of time!

Gods Of War is original and entertaining, brilliantly researched and superbly styled so that even Sir Arthur might have trouble recognising this was not his. I was particularly impressed with Lovegrove’s backgrounding with a passing nod and link to Conan Doyle’s major piece of historical fiction The White Company.

There’s life in the old dogs yet. If you’re a Holmes fan, you’ll love it. If you’ve only seen the BBC’s latest ghastly series, buy this and find out what fun the great detective can be.