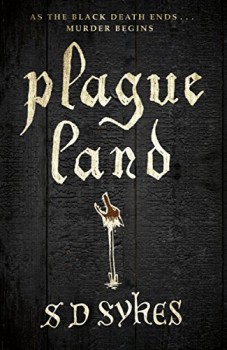 Monastery-raised teenager Oswald de Lacy, lord of the manor after the plague deaths of his father and brothers, must battle greed and superstition to solve the brutal murder of a young girl.

It’s always nice to welcome a new name to historical fiction and SD Sykes’ fascinating crime story, set in Kent in the aftermath of the Great Pestilence – or as we know it the Black Death – and  inhabited by a rich cast is a terrific introduction to what promises to be a new series.

She is a self-confessed addict of the more gruesome side of medieval life and her sharp and cliché-free style authentically recreates a 14th century world of squalor and superstition, whose dark horror is undiluted by the slightest hint of modern libertarian conscience.

At just 18, monastery-raised Oswald de Lacy, is the new Lord of Somerhill Manor, propelled to a title he never expected due to the plague deaths of his father and elder brothers. As he struggles with an estate slipping towards ruin through the ravages of the plague, he must also face the growing power of the local priest, whipping up the superstitious peasants for his own gain and, as lord, investigate the murder of a village girl.

His efforts, aided by Brother Peter, his mentor who has accompanied him from the monastery, lead him deeper into the often sordid lives of the villagers, the even more nasty lives of the noble families, including his own, who control them – and the secrets they have accumulated.

This is as much a coming-of-age saga as crime thriller – a sheltered teenage boy plunged into manhood against his will and readers will warm to Oswald’s character as he battles to unravel a tangled plot surrounded by poverty, ignorance, superstition, greed, brutality and sheer evil.

This confident and rich evocation of medieval country life under a feudal system on the brink of collapse as the peasants slowly begin to realise their power, bridges the historical gap between the work of the late Ariana Franklin and Tudor authors such as CJ Sansom.

While the plot may be a little thin in one or two places, every clue brings an unexpected twist and you’ll need a Holmesian brain to discover the killer before a clever, shattering – and entirely unexpected – denouement.

This is a strong debut which brings the reader so close to the history it portrays, but written well and with such pace that it will constantly carry you forward. It’s dark, it’s grim, but leavened with humour, particularly Oswald’s dysfunctional surviving family, and there are also a useful glossary and interesting historical note, probably worth reading before you start the book.

Despite Sykes’ eye for human nature, inventiveness and period mastery, there are one of two factual niggles – no parish priest, however creative in robbing his flock, could ever afford a destrier or probably have the skill to handle one. These specially bred and trained fighting horses often cost a knight’s total yearly income or more! And by 1350, four years after Crecy, news of the longbow, rather than the cumbersome, mechanical crossbow, might surely have reached even the wilds of the Weald!

That’s nit-picking from another medieval nut – and should in no way detract from what is an eminently readable and satisfying first venture. I anticipate Sykes’ next book with pleasure.