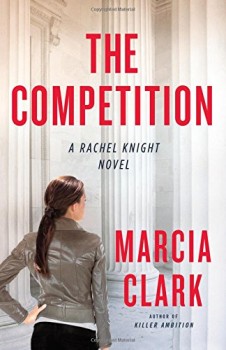 A high school shooting with multiple fatalities looks to have ended with the suicide of the two perpetrators, but it soon becomes clear that those responsible are still alive, and planning further outrages.

The Competition is told almost entirely in the first person by Deputy District Attorney Rachel Knight, who, together with her friend Detective Bailey Keller, heads the investigation when a rally in a Los Angeles high school gym is interrupted by two masked youths with assault weapons, leaving more than 30 people dead. Horrible as this is, things become worse when it emerges that the killers escaped unharmed and unidentified.

Rachel and Bailey then pursue a few very thin leads to try to narrow down the list of possible culprits, mainly with an exhausting programme of interviews of traumatised children. Several false trails peter out, and when Rachel receives a letter from one of the shooters boasting of his campaign to out-perform other mass murderers, the pressure is on to solve the case before more are killed.

This is the fourth outing for Rachel Knight, and as in her previous books she acts more like a detective than a lawyer, strange from a UK perspective but apparently proper in the US. Less convincing is the almost complete autonomy that the pair seem to enjoy for such a high-profile case. Reference is made to large numbers of uniformed officers undertaking the more routine tasks called for in a tragedy of this nature, but that their work would be coordinated not through an incident centre but by a few random persons via Keller’s mobile sounds dubious.

When they start to make progress, Knight and Keller show an alarming tendency for unilateral action without back-up or word to superiors, including raiding a flat where they believe one of the armed murderers is hiding, and then setting up a midnight confrontation with a representative of a Mexican drug cartel with the help of a Latino gang leader who owes Rachel a few favours. The author’s enthusiasm to step up the drama for her protagonists stretches credibility rather too far.

The help of a pair of psychologists gives the author the opportunity to introduce some observations about high school killings, the sheer number of which in the US makes this a subject of interest. However, these sections and the observations made add little to what is commonly reported about such killers.

As usual, Rachel remains closely in touch throughout with Graden, her cop boyfriend, and various other colleagues and friends with whom she exchanges witty banter. This, and the tension that Clark builds up, keep the book rolling along. However, an overlong first part, with rather too many interviews with distressed teenagers, and the weaknesses referred to earlier, deprive The Competition of some of the pep of earlier books in the series.