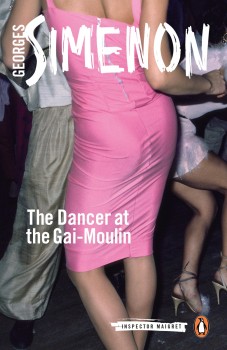 The Dancer at the Gai-Moulin

Two boys, attempting to burgle a Liège nightclub, find a body on the premises and flee. When, a day or so later, the body turns up in the botanical gardens the boys and the nightclub staff come under suspicion.

This is an unusual book about the famous detective because the name Maigret does not even appear until more than half the novel is complete. When he does eventually turn up, however, order quickly replaces chaos and and the impossible is seen as perfectly feasible.

The Maigret novels in general have a sense of atmosphere and this one, set as it is in Liège, the place of Simenon’s birth, is no exception. The Gai-Moulin is not the only nightclub in the area and one imagines the rest to be equally seedy. There is a male professional to dance with the women clients, a hostess who, though still young, has seen better days and a rather tired orchestra. When for once the club has a large attendance complaints are made about the cost of the drinks. It is exactly what one would expect from a provincial nightclub.

The emphasis is not on its rather disreputable nature but rather on something like pity for the people who work there – Adèle in particular – and for the adolescent boys who frequent it, under the impression that they are being worldly and sophisticated. The main attraction for them is, of course, Adèle and they are disappointed when on this occasion she has to abandon them in favour of a new customer who is clearly very rich. It becomes obvious from their conversation when she leaves that they are there on this particular evening for a very specific reason.

Things do not, however, go according to plan and the two friends find themselves driven apart when they become prime suspects in a murder enquiry. One of them is soon being questioned by the police, the other having temporarily escaped. Since the murdered man is known to have been at the Gai-Moulin, the comings and goings of its staff become crucial to the investigation. It doesn’t seem to be making much progress, however, until Maigret arrives.

He is in Liège on what he thinks is a different case - one which involves possible espionage - but it becomes obvious to him almost immediately that the nightclub murder is closely connected and, with his usual perception, he begins to see what the local police cannot. As usual, his explanation makes what has happened appear quite rational, though without the additional information that he brings to the enquiry it would have remained a mystery.

The mere solving of a crime, however, is by no means everything in a Maigret story. We are always concerned with the human connection and this book is no exception. Largely, it is the relationship between the two boys that concerns us. Although they appear to be friends, one of them fails the test of friendship and uses the other as a means of escape from discovery and disgrace.

We feel a certain sympathy too for Adèle who had come to Liege in desperation, after almost starving in Paris and is now working at a profession that will last as long as and no longer than her good looks. There is also Monsieur Chabot, the father of one of the boys, devastated by his son’s reputation within the community, following the murder. Maigret can solve the crime but he cannot deal with the human consequences of that crime, nor, in the end, with the bleakness of human existence.