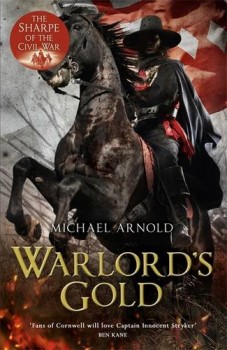 Captain Innocent Stryker is dispatched to the Scilly Isles in search of treasure hidden by a Royalist supporter.

The authors of that brilliant faux history 1066 And All That, Sellar and Yeatman, summed up the English Civil War in one pithy sentence: ‘Cavaliers: Wrong, but romantic – Roundheads: Right, but repulsive.’ It appears Michael Arnold has no intention of altering that view.

His good guys are Royalists. Captain Innocent Stryker – surely a name with a scarcely hidden meaning – the one-eyed mercenary swordsman, the carefree and dashing smuggler and privateer master Titus Gibbons, the poetry-quoting actor and soldier Lancelot Forrester and the beautiful and deadly Lisette Galliard are almost Hollywood characters.

His Roundheads vary in degrees of repulsiveness. But whether it is Parliamentary generals vying for position, religious fanatics or truly nasty killers for hire, it is difficult to find any sympathy for them.

In book five of his Civil War Chronicles Arnold has matured his style. The earlier books were sometimes a little jerky, pitching from high-speed and brutal action to complex hunts and character-driven sections. Now it is all so much smoother and this progression allows him to integrate several stories seamlessly into an overall theme.

The story opens with Stryker being dispatched to the Scilly Isles to recover a treasure hoard hidden by a Royalist supporter – money desperately needed for a war now in the balance. Forrester, meanwhile, is sent on a special mission to gauge support for his king in the south of England. Arnold seamlessly joins the twin plots, uniting them in the Parliamentary siege of Basing House, a Hampshire Royalist stronghold in an area largely favouring the Roundheads.

As always, he creates the most impressive villains. This time there’s a religious fanatic, a thoroughly nasty Balkan killer, a money-motivated double agent and a collection of physically mis-shapen and mentally twisted blades for hire.

Arnold’s historical research – and use of period language to create an overall picture – are superb, and his torture and battle scenes sufficiently brutal, bloody and realistic to satisfy the most hardened reader.

If you’ve read the first four books, you’ll note that the tide is beginning to turn against the Royalists – and the real villain of the piece, a Parliamentary colonel by the name of Cromwell, has registered his presence.