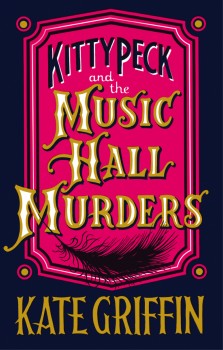 Teenage music hall seamstress Kitty Peck is blackmailed into a career as an aerial artiste but in return for freedom for the brother she thought dead, Kitty must also find out why girls are going missing from the music halls Lady Ginger controls.

Occasionally a new writer bursts onto the scene with almost explosive force. Cockney-born Kate Griffin definitely comes into this category. She won her chance in a competition to find the best unpublished crime writers and if she maintains this superbly high standard we have a major new talent on our hands. Her hugely entertaining debut, set in the squalor, filth and depravity of Victorian Limehouse is all things to all readers – almost gothic in its intensity, but full of shades of dark and light, combining the macabre and wit of the music halls with a rattling action yarn which will appeal to historical readers, crime readers and people who just like a really well written adventure story.

Griffin, whose grandmother grew up in the area she writes about, got her grounding in local papers and not since another journalist/novelist, Charles Dickens, has Victorian London ever been better illustrated. The filth and stench is almost palpable and the vivid descriptions of the sights and smells of everything from the inside of a music hall to the tacky gin palaces and opium dens and the ‘penny bobbers’ in the sordid alleys and doorways, brings a horrifying reality to what is almost a theatrical story totally in keeping with its setting.

Kitty Peck is a real Cockney sparrow – a sharp-witted, physically brave, working-class teenager who matures rapidly in adulthood as the often genuinely frightening twists of the plot force her into a world of intrigue and danger.  Her ‘employer’, a vicious opium-addicted old woman who controls everything in the ‘Paradise’ manor – a sort of female forerunner of the Krays – holds out the prospect that her missing brother is still alive to blackmail her first into becoming an aerial artiste, then investigating the disappearance of girls from the music hall where she works. But behind all this, the fearsome Lady Ginger, with her retinue of Chinese and Lascar enforcers, has another reason.

The first person narration – thankfully no ‘Mockney’ included – adds to the immediacy and pace of what is a real page turner. Griffin has a nice turn of phrase and a strong narrative drive that ensures the story positively gallops. Her cast is skilfully managed, from a brutal, drink-sodden former bare-knuckle fighter turned music hall manager, through her closest friend, a sensitive, artistic Italian homosexual, to caddish, depraved toffs who exploit the poverty of the area’s inhabitants for their own pleasures, and combine seamlessly to keep the reader guessing all the way to the satisfying conclusion.

Griffin’s work is original and gutsy. It’s a genuinely old-fashioned whodunit. There are no self-doubting, hard-bitten detectives, just a determined young girl trying to make sense of a dark and dangerous mystery. How many sleuths do you know who spend their working life in a skimpy costume hanging upside down from a trapeze perch 70 feet above the stage with no safety net? The ending is just about open enough for a follow-up, although it’s difficult to imagine where Kitty can go from here. The book is an absolutely first class read and I shall be surprised if there’s a better debut this year.