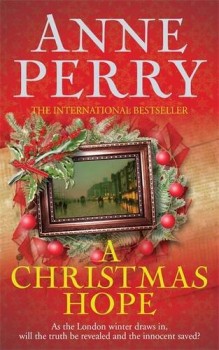 Claudine Burroughs attends a party at which a young woman is badly injured. An eccentric poet is accused of the attack but Claudine suspects him to be innocent. She sets out to establish the truth.

Claudine Burroughs, unhappily married to Wallace, has just embarked on the usual round of social events in the run-up to Christmas. At one party a young woman is attacked and badly hurt. An eccentric poet is accused of the attack by a group of young men who were also in the vicinity. The young men, all from wealthy society families, are believed without question, but Claudine has her doubts, and sets out to establish what actually happened.

This Christmas novella has all the hallmarks of the author’s longer novels: it is well written with beautiful descriptive passages, there is a clever plot and the characters are given depth through insight into their thoughts and feelings. Indeed, it overlaps the Inspector Monk series in that Claudine works at the clinic set up by Hestor Monk, the inspector's wife.

However, one means of keeping the length to a minimum is not to involve the inspector but to allow Claudine to investigate by herself, involving only her friends and colleagues. This enables the main focus to be on the morality of the story as might be deemed fitting at Christmas. As always the descriptive passages are a joy. The Victorian Christmas decorations, people’s clothes, and even the cold and blustery weather are all brought to life through the experiences of the characters.

Claudine’s insight into the likely consequences of each possible course of action forces the reader to confront the rights and wrongs of the situation, and to come down on the side of good rather than evil. The book would be unreadable for anyone unwilling to enter into this Christmas spirit. Some of the fundamental characteristics underlying the story are logic and a belief in justice, regardless of social status.

The book is comfortable and effortless to read with the action all in the present. Much of the dialogue is interspersed with close observation of the characters as they talk so that it is possible to see behind the words. There’s a real sense of a character’s feelings and thus whether they are genuine or not. It is recognition of the way in which the human mind carries out internal discussions with itself at times.  The style is probably not for someone looking for suspense or fear, or even excitement, but somehow it all works.