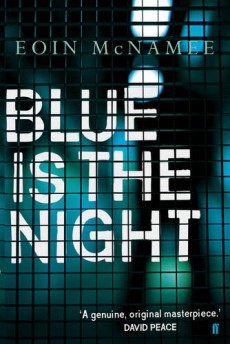 Blue Is The Night

Ulster Attorney General Lance Curran faces huge political pressures over his decision to prosecute a young man for a brutal killing where a conviction and death sentence threatens to rip the Province apart. At the same time he must deal with an increasingly unstable wife and a rebellious adolescent daughter.

Eoin McNamee has produced a loose trilogy of almost Gothic horror, culminating in this courtroom drama which exposes Ulster society prior to the Troubles for the cruel sham it was.

Attorney General Lance Curran faces huge political and personal pressures over his decision to prosecute a young man for a brutal killing where a conviction and death sentence threatens to tip the Province into sectarian violence. At the same time he must deal with an increasingly unstable wife and a rebellious adolescent daughter.

In the first two books McNamee dealt with the unsolved murder of Curran’s daughter and his own involvement as presiding judge in the murder trial of Robert McGladdery, the last man hanged in Belfast’s notorious Crumlin Road jail.

This strange and unconventional story is part new case – the murder of a Catholic woman and the sensational trial of ‘Robert The Painter’ – and part a revisiting of Patricia Curran’s killing, with a brief mention of McGladdery thrown in.

It leaves a lot unanswered. But its focus on the corruption and decay of the Stormont parliament and Ulster society in general, with its implicit understanding that ends justified means, and that if a guilty man freed was the price to keep the Shankill mob off the streets it was worth paying – brilliantly brought to life through the person of Curran’s ‘fixer’ Harry Ferguson – is worth closer study in the light of what was to follow.

McNamee presents his story cleverly with enough discontinuities, nuances, gaps between the lines, nudges, winks – and occasional heavy hints – to build, then reinforce, its plausibility.

At the heart of it is Curran – a Unionist MP through electoral fraud, a member of that corrupt establishment, but willing to see a Protestant hang for the murder of a Catholic. Privately he is a reckless problem gambler with a precocious daughter, a son training for the priesthood and a wife who grew up in Broadmoor. He has much ambition, but little direction.

The trial scenes are particularly well drawn and McNamee wrings tension from the courtroom drama even though guilt is not in doubt. If his subject is ugly – violent death, cover-ups, conspiracies and corruption – his writing is often almost lyrical, with short sentences providing a clever counterpoint.

The first in the ‘Blue’ series made the long list for a Booker. This is a better work by far and firmly establishes McNamee as one of Ireland’s most gifted writers.