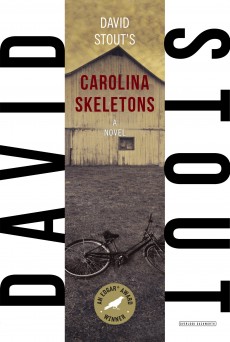 A 14-year-old black boy follows two white schoolgirls into the woods. Later they are found brutally murdered.  In an atmosphere of racism and possible Klan violence, he is sentenced to death. Forty years later his nephew tries to find out what really happened.

This brilliant and moving book won its author an Edgar for Best First Novel when it was originally published in 1989 and it remains just as relevant and compelling today.

America may have moved on, with a black President and integration backed by civil rights laws, but this simple and beautifully told story is about far more than the entrenched racism of the rural southern States, which, despite all the changes, is still not completely eliminated.

The story is in two parts, set in 1944 and 40 years later. Both perfectly reflect small town American attitudes of the times – the racism and casual brutality of the white population, the cronyism and political manoeuvring, as well as the closed communities where neighbourliness and decency has always had its place.

Linus Bragg, an undersized and barely educated 14-year-old black boy from a timber mill’s shack village, follows two white girls into the woods, driven by urges he cannot understand.
When they are found brutally murdered he becomes the prime suspect.

The local sheriff, a decent and upright man, does his job as he sees it. But when Linus apparently confesses, his fate is sealed. Politics makes it convenient to have him tried in his home town – a community where old men, when they talk of the war, mean what the south knew as the War of States’ Rights, but the rest of the world knows as the Civil War.

Linus is convicted, sentenced to death – and electrocuted. Forty years later, his mixed race nephew, unemployed after the newspaper he worked for collapses, decides to honour a request by his mother and try to find out what really happened.

Unsure of himself, his quest or his future and haunted by dreams of his family’s violent past, he blunders around the small town asking often poorly disguised questions of white and black alike. When two of the old men he has talked to die mysteriously, he too becomes suspect.

This is no great detective novel. The killer is blatantly obvious from the first time he appears. But what ties it all together is the characters of the old sheriff, in the second section crippled by a stroke, and his younger son, now a captain of State police, who has inherited his father’s tolerance and his determination to do his job to the best of his ability – and to justice.

This pair and the clever portrayal of all the lesser protagonists are what make this book so memorable. They capture perfectly the social attitudes of the times and are so brilliantly drawn you will have difficulty at times remembering this is a novel.

The story illustrates the best and worst of America – and just how little changes in some respects. The scene in which white power fixes the venue for Linus’ trial is mirrored in the ‘present’ when the nephew is approached by an ambitious black mayor with designs on a Congressional seat.

It’s a fascinating and convincing read, full of pace, power, wonderful descriptions and totally believable situations, with a message that rings as true today as when it first appeared.