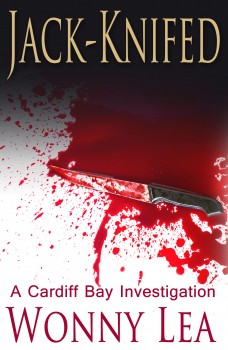 When a gay man is found butchered in his own kitchen there appears to be no suspects and no motive. DCI Martin Phelps and his team must probe the man’s disturbed past to uncover a sinister chain of events – and more killings.

You can’t mix cosy with cathartic. Wonny Lea’s opener for her Cardiff-based DCI Martin Phelps series reflects that as it lurches between horrifically noir and blatantly boring with little balance.

Her problems start with her hero. To bowdlerise Gilbert and Sullivan’s immortal ditty from the Pirates of Penzance: ‘Martin is the model of a modern PC policeman’ – and he’s a damn sight funnier than Major General Stanley!

I cannot believe South Wales Police, despite having had a woman chief constable in 2004 (not 2005) as Lea unnecessarily points out, have reached such a nadir of correctness where a senior officer opens his first session with a murder squad by advising them counselling is available, or that he considers officially reprimanding a civilian IT employee for joking referring to said chief constable as ‘The Wicked Witch of the West’!

Lea is so obsessed with exploring this infuriating paragon that we learn Phelps’ beloved aunt left him a cottage and exactly £26,472, that he drives a metallic blue Alfa Romeo 156jts – and, of course, that he has a feminine side which makes him want to hug his badly injured sergeant.

We get to know everything about him except his inside leg measurement – and doubtless that will appear later in the series. That he actually has sex comes as something of a surprise!

All of which, together with extraneous details about Cardiff’s history, the development of the multi-million Bay development and a general tourist guide, detracts from what could be a simple, brutal – and when Lea gets around to it – well-told murder mystery.

Three female friends of a well-off and good-looking homosexual find him literally butchered – individuals can’t be massacred – on his own top-of-the-range kitchen worktop.

The only other damage is the vandalising of a hugely expensive settee. Nothing is missing from the house. There are no signs of forced entry. Is it a crime of jealousy, or perhaps a hate crime?

The dead man has no apparent enemies. The only clues are in his disturbed past. His violent, homophobic father is serving time for murder. His estranged, drug-addicted, sister hates him.

It’s great scene setting, but unfortunately the story gets bogged down in copious and irrelevant asides. There are references to the effects of the collapse of traditional business – mining, heavy industry and the docks – and its lasting effects on the social structure of South Wales with its high rates of unemployment, poverty, drunkenness and drugs. Surely this was worth more attention.

All in all, it’s a great short story spoiled by about twenty-odd thousand unnecessary words. I shan’t be following DCI Phelps’ meanderings around ‘the world-famous and vibrant’ Cardiff Bay and I’m so glad I’m retired and will never have to work with anyone who even slightly resembles him!