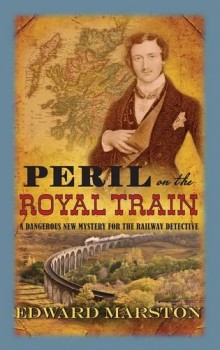 Peril On The Royal Train

London railway detectives Colbeck and Leeming visit Glasgow to investigate a crash and conclude that another atrocity will follow, this time with the royal family as target.

In 1858, a goods train on the Caledonian Railway hits a pile of rocks deliberately dynamited onto the line, resulting in three deaths. The manager seeks the help of famed London railway detective Inspector Robert Colbeck and his Sergeant, Victor Leeming, to bring the culprits to justice.

Colbeck has to threaten resignation to secure the permission of his superior to go, and on arrival in Glasgow finds local police uncooperative and hostile. Nevertheless, a number of suspects are chased down and eliminated from the enquiry, when events in London discovered by Colbeck’s wife and father-in-law suggest that a follow-up attack is planned, this time with Victoria and Albert as the victims.

This is what might be described as a good old-fashioned crime story, the sort of thing that would appeal to Agatha Christie fans.  There are plenty of possible villains trailed: a shepherd angry at the number of his flock killed by trains, a competing railway company, and aggrieved ex-staff dismissed for transgressions, to mention but a few. A small group of Sabbatarians, who object to railway travel on Sundays, feature every few pages, engaged in various unspecified activities. The true perpetrators and their motivation remain obscure until the end, despite the red herrings.

If the reader has little chance of discerning the criminal by deductive method, the approach to policing has some interest given the early date and the lack of forensic assistance available. The two detectives are certainly prepared to put in the legwork to elicit locations where they might find suspects, and are not afraid of fisticuffs when necessary to apprehend their quarry. They are also relatively open-minded for their time and this is frequently in contrast with the more conventional persons of limited horizons that they have to deal with.

Unfortunately, there are a fair number of the latter, and although they provide a good foil for the protagonists, the humour to be gleaned from their behaviour palls very quickly. Tallis, Colbeck’s immediate superior, jealous rivals Superintendent Rory McTurk and Inspector Rae in Scotland, and Andrews, Colbeck’s father-in-law, are all men of limited ability with plenty to say, and we hear rather too much of it.

Peril on the Royal Train is number ten in Edward Marston’s railway detective series, itself only one of several series by this prolific author. No doubt his continued publication bears witness to a steady audience for this style of crime book, who may find in the straightforward motives of offenders and robust approach to police work certainties not found in more equivocal modern fiction.