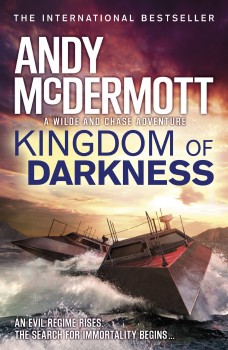 Nina Wilde has given up her job and is working through a bucket list of things she’s always wanted to do while she still has time to do them. But when one last job comes along, helping safeguard the secrets of Alexander the Great’s tomb, Nina can’t stay away despite her husband Eddie’s misgivings.

Unconventional archaeologist Nina Wilde has left her beloved job at the International Heritage Agency and is working through a bucket list of things she’s always wanted to do while she still has the time – and health – to do them. But only Nina and her husband Eddie Chase know the hard truth behind why she’s given up archaeology in favour of writing up her famous – or in some cases, infamous – discoveries.

You name it, Nina has found it, and in some cases, reduced it to a pile of rubble, although in fairness, the latter hasn’t always been her fault. She’s discovered Atlantis, the tomb of Hercules and the Garden of Eden, uncovered the secret of Excalibur, tangled with various murderous cults and even travelled to the halls of the Norse gods. But all of this has come at a price, and the legacy of her last adventure is now threatening her life, so Nina is determined to spend some quality time with Eddie before it’s too late.

The only problem with that plan is that Nina has a love affair with trouble almost as deep as the one she has with her ex-SAS husband, so when someone she doesn’t even know dies in an attempt to deliver a warning, Nina simply can’t help getting involved, especially when the opportunity arises to be involved in the opening of the tomb of Alexander the Great in Egypt.

As ever, Andy McDermott mixes high action car chases, gun battles and mysterious quests, then shakes them well to provide an explosive cocktail. A breakneck running battle on a speeding train is an absolute classic, reminiscent of Bond films at their best.

The overall formula is simple – Nina gets them into scrapes, and Eddie gets them out of them, usually by employing an entertaining mix of improvised weapons and sheer bravado. But when the chips are down Eddie isn’t afraid to put total faith in his wife’s problem-solving abilities, and that’s what makes these two such a good team. There are even times when Eddie – think the words ‘buggeration and fuckery’ delivered in a strong Yorkshire accent and you won’t go far wrong picturing him – bears more than a passing resemblance to Peter O’Donnell’s wonderful creation, Willie Garvin, and trust me, that’s high praise indeed!

This is action-adventure escapism at its best, but the inevitable deaths, when they do come, hit hard, as apart from the Nazi villains – and I defy anyone to make them more than one dimensional – McDermott is adept at bringing his secondary characters to life. Nina and Eddie don’t inhabit a word where everyone on the right side escapes miraculously unscathed, and the books are the stronger for this.

I have no idea where this particular dynamic duo will go next, but I hope this isn’t the end of the road for their adventures, even if the two of them do deserve some well-earned rest and recuperation.