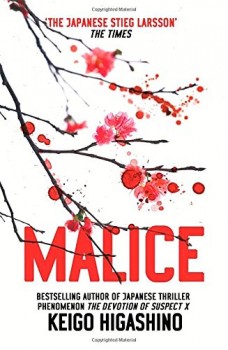 When a writer is found bludgeoned and strangled, police suspicion falls on a supposed friend, who may have had a powerful motive.

This book takes the form of interleaved sections voiced by Nonoguchi, a friend of the murdered writer Hidaka, and Kaga, a detective. As the book progresses, past events go through several reinterpretations, until all subterfuge is stripped away and it is finally revealed as to who is truly guilty of malice.

It begins with a statement made by Nonoguchi of his visit to Hidaka at his house in a Tokyo suburb, from where Hidaka and his wife were planning shortly to depart for resettlement in Canada. Making a later second visit at Hidaka’s request, he enters the house with Hidaka’s wife and the pair discover the body.

Kaga finds several aspects of Nonoguchi’s version of events suspicious, and is soon able to show that he is the murderer. A search of his flat produces some interesting material, in particular drafts of the books with which Hidaka has achieved fame and fortune. Nonoguchi then reveals details of the relationship between the two men, which show that he had a powerful motive which puts the victim in a poor light. Kaga is, however, convinced that there is more to come, and presses on.

Malice was first published in Japan in 1996, and its age is evident only in the reference to the use of faxes. However, the narrative - involving a perpetrator taking painstaking steps to set up the crime and a detective uncovering tiny inconsistencies in his story by close scrutiny - has a rather old-fashioned feel. That said, the details are built up in a skilful fashion, and the developing story is sufficiently engrossing to keep the reader interested and uncertain until the final reveal.

The final stage takes Kaga back to the earliest contact between Hidaka and Nonoguchi, when they both attended the same school where the most horrendous bullying was a feature. It is only at this point that we get to find out something personal about the detective himself: that he abandoned teaching for police work after an incident involving bullying which left him with a great sense of personal failure.

This point of contact with the protagonist is most welcome, and is the only point in the book where feelings are properly explored. No doubt this is a matter of sensibility: in Japanese literature it is usual for the reader to be expected to discern the emotions of the characters from the action without the gross intrusion of the author into their mental state. It does, however, leave a rather blank or cold impression on a Western reader more accustomed to being given access to the thoughts of participants in the drama. If a crime is not acknowledged as an emotive event, its depiction can feel a little mechanical.