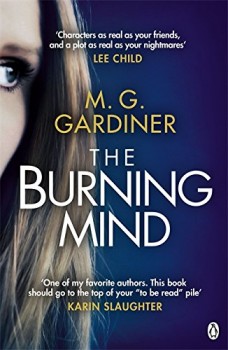 Harper Flynn nearly died in an attack on a club. A year later, she’s convinced that one of the gunmen is after her, but no one else believes in his existence.

Harper Flynn is trying to rebuild her life after she nearly died in a shooting incident in the club where she worked. Her boyfriend Drew was shot and killed trying to save her, and Harper only just escaped with her life when the attackers threw a deadly Molotov cocktail and everything around her started to burn.

A year later, her life is getting back on track but at a memorial tree-planting in Drew’s memory she sees someone watching them, someone she thinks she recognises from that fatal night at Xenon – the third shooter, someone only Harper believes existed. Two of the gunmen were killed at the scene and everyone believes that it was a gangland killing that escalated.  But Harper knows what she saw and she’s determined to prove it.

The only person who believes her is Aiden Garrison, formerly a deputy sheriff, and the man who saved her life in the club. The only problem is that Aiden suffered a traumatic head injury and is now suffering from a rare syndrome which makes him sometimes misidentify people, believing that different people are actually a single person or that they’re disguising their appearance. Although Aiden also believes there was a third gunman, no one believes him, either, not even Erika Sorenstam, the partner he used to work so closely with.

The thing I like so much about MG Gardiner’s books is her ability to throw ordinary people into extraordinary circumstances and let them sink or swim. Or, in this case, do a lot of floundering in some very murky waters. Her characterisations is as good as ever, quickly bringing Harper, Aiden and Erika to life, and gradually peeling back some of the protective layers wrapped so tightly around Harper herself.

My only problem with the book was a persistent confusion between the name of the club where the shooting took place, Xenon, and the nickname of one of the bad guys, Zero. They don’t look much the same, but they certainly sounded the same in my head, and I just couldn’t get much of a handle on Zero for that reason.

That aside, The Burning Mind gets off to an explosive start and gradually gathers pace to a nail-biting climax that left me refusing to put the book down until I’d got to the end. Gardiner’s action scenes have everything: pace, clarity of description, excitement, sharp dialogue, originality and plenty of twists. If you’ve not read her thrillers before, this one will definitely leave you wanting more.