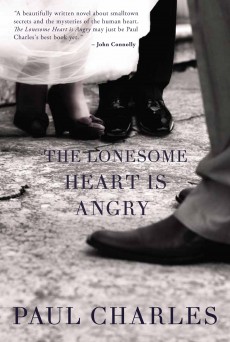 The Lonesome Heart Is Angry

The Kane twins Pat and Joe need female help to run their farm, but the place is too small to afford two wives, so they approach the local matchmaker with a novel proposal.

The Kane twins Pat and Joe need female help to run their farm, but the place is too small to afford two wives, so they approach the local matchmaker with a novel proposal.

The matchmaker, Gilmour, is shocked by the suggestion that they share a wife between them; if nothing else, if the word got out the scandal would finish his business. He talks it over with his sister-in-law Maggie, however, who takes a fancy to Pat and agrees to Joe having extra-conjugal rights once a fortnight as the price for marriage to her preferred twin.

The newly-weds soon find the situation intolerable. Joe is introduced to possible partners and for a time finds release elsewhere, but when this falters he presses for a return to the initial arrangement. Pat and Joe have a very public fight, soon after which Joe disappears. After a couple of weeks, the attention of ‘Wee Doyle’, the District Detective, is drawn to the fact, and he begins investigating what he suspects may be a case of murder.

All this is set in the small provincial town of Castlemartin, not far from Loch Neagh in Northern Ireland in 1964. There is not a mention of ‘the troubles’ and we are introduced to a small cast of characters with entirely local concerns. Anything new or odd is enough to set local tongues wagging, and although a few instances of mutual assistance are mentioned, the intrusive interest in one’s neighbour’s doings, so much a downside of rural life, is the dominant feature.

The slow and rural pace of life is given additional emphasis by the style of writing, and the progression of the plot, which is plodding throughout. Developments are signalled well ahead, and there is nothing to upset or alarm the reader until the finale. At this point we find that despite exorbitant detail with which the relevant events are described throughout the book, substantial action by certain characters has been omitted. The perpetrator could be substituted by a rewriting of the last 15 pages and the book would be no less convincing.

This book may appeal to those who enjoy the depiction of life in a rural community, who are prepared to engage with a list of fairly unexceptional characters, and especially those who share the enthusiasm of the author for the hits of the early 1960s. Those who hate The Archers, however, are unlikely to find this book of interest.