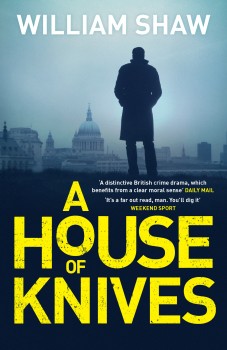 A House of Knives

DS Cathal Breen and DC Helen Tozer investigate the death and mutilation of an MP’s son in swinging – and corrupt – London in 1968.

It’s 1968 and on the streets racism is rife; ‘boot boys’ and Hell’s Angels make an appearance; the Sixties of peace and love collapses in the face of exploitation and corruption; Home Secretary Jim Callaghan’s abolition of ‘scrips’ – doctor-prescribed drugs – sees an explosion in the illegal trade, largely dominated by Hong Kong-based Chinese Triads.

The celebrity culture takes root, fuelled by the excesses of pop idols like the Beatles and the Stones, featuring people like Robert ‘Groovy Bob’ Fraser, the Eton-educated art gallery owner Paul McCartney called: ‘One of the most influential people of the London Sixties scene’ – and who has a part to play in the story.

His flat and gallery were home to a salon of pop stars, artists, writers and other celebrities, created trends – and news – particularly after his arrest along with Mick Jagger and Keith Richards at the infamous party at Richards’ house, said to have featured an ‘interesting’ use of a Mars Bar! Fraser was sentenced to six months hard labour and after his release his gallery failed as his heroin and alcohol addiction worsened. He died of an AIDS-related illness in 1986.

If the history lesson seems excessive, this year of turmoil and class conflict is as much of an integral part as it is background to William Shaw’s brilliant second book featuring Detective Sergeant Cathal Breen and Temporary Detective Constable Helen Tozer.

If their debut in A Song from Dead Lips was impressive, this story hits new heights, catching and reflecting so accurately the spirit and the reality of the time, with the weight of these wider issues making it more gritty and compelling.

On the night his father dies, Breen examines a body in a burned out house. The sensitive Irishman is still hopelessly out of place in the brutally racist, sexist, tribal, homophobic, hierarchical squad room of Marylebone CID and his guilt over his absence from the deathbed and his failure to identify the body isolate him still further.

Then a gas explosion reveals a second mutilated body of a young man – who turns out to be the son of a junior minister in Harold Wilson’s beleaguered government. To add to the complications Breen also begins to receive death threats – which he assumes are from a corrupt CID sergeant he has forced to resign.

Tozer is about to return to her Devon farm home where her father is ill, sick of the casual sexism of the Met which sidelines her because of her gender and also tired of the culture of police dealing out their own justice and closing ranks under threat.

Breen, a decent man with deep emotional issues, is a truly likeable character, as is the chippy, intelligent Tozer, a woman torn between family and career with a softer side she works hard to disguise. Together they set out to find out what happened to the MP’s son and become sucked into the maelstrom of contradictions that was swinging London.

Shaw’s easy, fluid style keeps interweaving storylines and clever character development flowing so it is difficult not to become emotionally involved with both main characters as a sordid plot involving drugs, spoilt rich boys, manipulative or misguided hippies, politicians and corrupt businessmen develops to a dramatic conclusion in this first-class read.